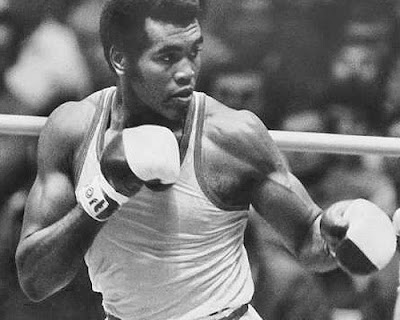 Ok, church door returns post Euro 2012 and before moving onto that calamitous event we spend a second simply noting the passing of the great Cuban boxer Teofilo Stevenson, who passed away on the 11 June.

In the mid-seventies, with Cold War Soviet - US politics at their height, the names of a few Cubans caught our imagination through their participation and successes at the Olympic Games. While they may have been products of a Marxist regime, and funded and trained using Communist resources, the profiles of Teofilo Stevenson and Alberto Juantorena evoked powerful images of sporting prowess and ability.

Stevenson won three Olympic boxing gold medals in 1972, 1976 and 1980 while Juantorena holds the distinction of being the only person to have won Olympic gold medals in both the 400 and 800 metre races – won at the 1976 Montreal Games.

Whatever about the impact of the underlying politics on the national economy, the regime does not seem to have moved either of these men away from a deep sense of belonging with their people and their country, even when faced with significant financial gain. Both have been repeatedly described as humble, simple men, dedicated to the cause of their people and the development of their nation.

The recent obituaries recount Stevenson’s response to the offer of a professional contract, and the chance to box Muhammad Ali with a personal purse of $1 million, when he asked "What is one million dollars compared to the love of eight million Cubans?"

I don’t think you’d find too many sportsmen adapting the same position nowadays.
Posted by Yiddo at 12:23 AM