Much of the artwork on the murals in Belfast centres on the religious differences and the hatred and bigotry which has destroyed the city over the past several decades.

On both sides of the divide however the one thing which appears to resurface again and again is the common man's love of the game of football. A classic example is the familiar mural of the man who appeared to unite the differing factions, George Best, but additionally dotted around the city is artwork which pays tribute to lesser-known and more "local heroes".

The artwork below, photographed last Thursday, lauds the Glentoran team of 1973-74 which reached the quarter-finals of the European Cup-Winers Cup before losing 7-0 on aggregate to Borussia Moenchengladbach. To reach this stage they beat Brann Bergen of Norway and a now dissolved Romanian team,Chimia Râmnicu Vâlcea. Already out of the competition at this stage were the LOI, English and Scottish Cup Winners - Cork Hibs, Sunderland and Rangers respectively. 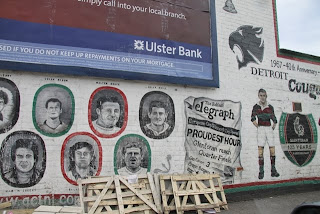 Four and twenty virgins came down from Inverness

“Four and twenty virgins came down to Brittas Bay,
And when the boat was righted there were two little virgins less,
Singing "Balls to your father, backs against the wall,
If you don't get shagged on Saturday night in Brittas you'll never get shagged at all".

Start by having a look at the state of us. The fact that any of us scored is a terrible indictment on the standards set by the females that eventful weekend. Still as one of us learnt and, as the song goes, small people got no pride. 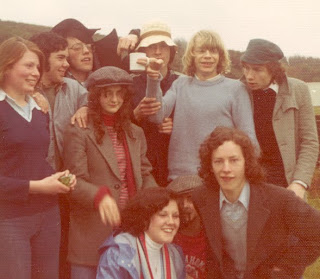 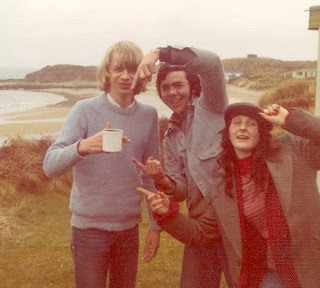 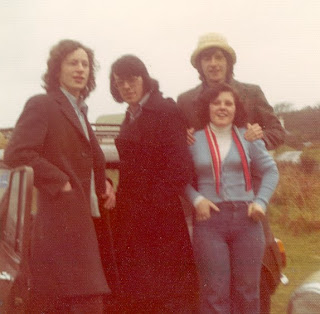 Feeling like a million dollars and looking like total pricks we headed for a weekend of boozing and debauchery on the beaches and pubs of North Wicklow in late 1976. True to form, first night enthusiasm (around the pool table in Jack White’s) led to several falling at the first hurdle and a particular trying night for Byrne from Sutton, who proceeded to destroy the McCooey mobile home, or more precisely, the toilet in the McCooey mobile home.

Curiously, Byrne’s actions that night were to be repeated five short years later – in the Maze prison just outside Belfast – but while the latter incidence brought worldwide recognition and public support in Ireland, Byrne’s actions in Brittas brought a less than favourable response from poor Art who had to clean the mess up.

Unperturbed by the events of Friday evening and oblivious to the fact that we were wearing flares and absolutely ridiculous headgear, we weathered the storm and headed for McDaniels the following night. While most of us were content to nurse our beers and hangover and to try to make small talk with the locals and the Dublin girls, one focused individual in our midst had other intentions.

It was a quiet balmy night and there were mosquitoes and midges all around. When the rain began to come down in sheets as we walked home, we rushed for shelter wherever we could and an upturned boat offered tremendous opportunities to stay warm and out of sight. Seven hours later, certain lives had been altered permanently and one of the greatest slagging opportunities known to man had been created. To this day it lives on. To the nautical one among us, we pay tribute - your determination, swiftness of action and inventiveness that night was worthy of Casenova. The current generation of young bucks out there could learn a lot from you - and save themselves a load of shillings on Bacardi breezers on the way through.

You were then, and always will be, the Special One.
Posted by Yiddo at 3:48 PM 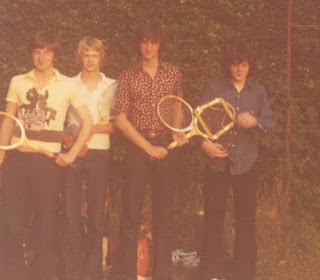 Hard to believe that Mark Ryan was once the runt of the litter, even smaller than Gerry.
Belfield 1976?
Posted by Yiddo at 10:31 PM

Labels: Back in time, Ryan