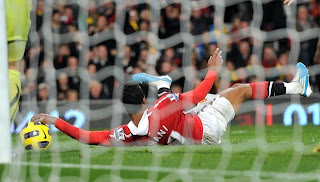 A bit close to the bone this one, but why do most of the cheaters in world football come from a Hispanic or Latin American background?

For years we have listened to stories of cynical tactics and blatant attempts to fool referees and intimidate opposition players - Argentina 1966, Athletico Madrid in 1974 and Maradona 1986, spring immediately to mind. And then this weekend, when Ricky Villa is quoted as admitting that a little bit of cheating is acceptable in Argentinian football, we have this little prick Nani doing it when it is most serious - against Spurs. And of course while we're on the subject of United, we also think of that thankfully-departed-from-the-Premiership-toad, Ronaldo. Thanks be to fuck that he's back in La Liga.

We need a few more like this - you see there are a few good ones.