I'm beginning to think we might be a little bit out of our depth in the Champions League thingy after the debacle in Bern last night.

OK, we came away with only a one goal deficit and we scored two away goals but, artificial pitch excuses aside, we were absolutely hopeless for the first half - were it not for Harry's intervention after 30 bringing on Tommy Huddlestone we would have been annihilated. The ship having been steadied, we had a piece of luck just before half-time to make it 3-1 and then in the second half a piece of sheer genius from the Russian gave us a challenge for next week which is clearly surmountable. He needed to redeem himself with that wonder goal because he had played like a pansy up until then. Robbie Keane's role in the goal should not be overlooked. 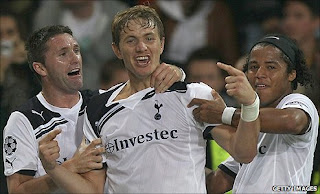 And so to the Lane next Wednesday and the return of the Glory Glory nights. While I think we should have enough to go through, I have a sneaking feeling all of this is going to end in tears.

PS - note the new shirt and the new sponsor- designed specifically for the Cup campaigns apparently - oh yea? The reality is that (while it may be a key part of the club's secondary sponsorship arrangement for the season) it also is a "clever" way to extract more money from the die-hards who are the lifeblood of the club. That's four kits for the season to date and still counting.................