The greatest pensioner of them all 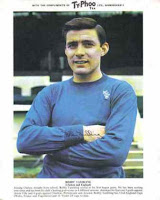 Nice page long feature in Friday’s Waterford program on Bobby Tambling who played for the Blues in the 1977/8 season and scored eight League of Ireland goals in that season, alongside a newly-signed Syd Wallace.

Bobby holds the Chelsea record for goals scored with 202 and was voted in the Chelsea fans all-time eleven in a recent poll – not sure however if he made it onto Gerry’s “As Good as it Gets” t-shirt, a far more relevant recognition of genius.

Tambling played with Chelsea from 1958 to 1970, leaving them to join Crystal Palace where he continued his Football League goal-scoring for three years. He left England for evangelical duty as a Jehovah’s Witness in Cork, and signed for Cork Celtic whom he assisted in winning their one and only League title in 1974. Tambling still lives in Crosshaven in Cork.

Another footballer of that vintage who retired to become a Witness was Peter Knowles of Wolves (brother of the late Cyril). He played 174 games for Wolves, scoring 61 goals, yet retired at the age of 24 to follow God’s calling. It’s an awful shame the Witnesses didn’t think about forming a team as they would have been pretty useful based on their first two signings.

A third footballer who was deeply influenced by his religious commitment was Frank McAvennie of Celtic, who always blessed himself immediately after scoring against Rangers. I assume this was a way of saying thanks to God for the inch-perfect pass he had just received, and part-apologising for the fact that he wasn't going to retire just yet. And Gazza, poor innocent fool that he was, playing the flute in the background, and wondering what the hell was going on on the terraces.
Posted by Yiddo at 3:24 PM