The Horns of the Buffalo 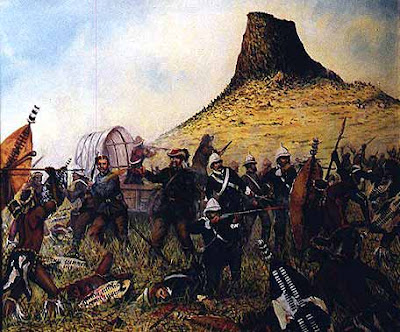 In preparation for our visit to the WW1 sites, CDB focuses on Yiddo’s visit in 2010 to the site of one of the British Empire’s most comprehensive and devastating military defeats.

This event took place at Islandwana in Zululand on this date in 1879, one hundred and thirty-four years ago.

To drive to Rorke’s Drift (scene of another heroic battle several days later) from Durban one must pass through some particularly difficult terrain and if the Yiddo family found it a challenge in a four-wheel drive in 2010, one can only imagine what it was like when Lord Chelmsford led a force of 5,000 British troops there in January 1879.

The intent was to drive into Zululand and subdue the locals armies (led by King Cetshwayo) – a motive which was partly expansionist and partly protectionist - Zululand bordered onto the British colony of Natal and there were fears as to the threat created by the local chiefs.

Having set-up camp under the distinctive sphinx-like hill called Islandwana, Lord Chelmsford made the mistake of splitting his force and sending the main body (with himself in command) in a misguided pursuit of the Zulu army. The main body of Zulus were actually hidden behind Islandwana and at 11am on the 22 January 1879 they advanced on the remaining British force. The encirclement tactic employed by the Zulus was known as izimpondo zankomo, translated as “The Horns of the Buffalo”, a description of the movement of the victorious army as the centre is sacrificed or strategically deployed to allow an encirclement to take effect.

The British forces lost 1,350 men – 1,000 of their own and 350 local auxiliaries. The battle at Isandlwana stunned the British Empire and indeed the world. It was heretofore considered inconceivable that a primitive local army, ill-equipped - stabbing weapons only, could so comprehensively defeat the troops of a western power armed with modern rifles and artillery.

In the Ardennes and at Ypres we shall see white crosses commemorating the fallen – at Islandwana the last standing place of the British soldiers is marked with a mound of white stones, in keeping with local burial traditions. 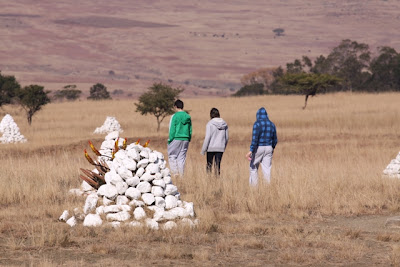 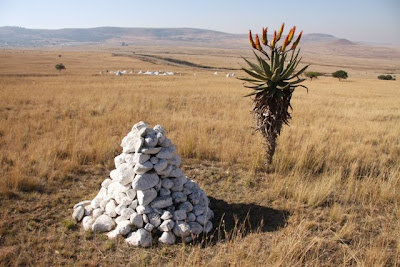 The political ramifications of the defeat were significant and the recriminations over war-mongering and incompetence led to discord between the Prime Minister at the time, Disraeli and Queen Victoria. This by all accounts was a rare event. Chelmsford was recalled and in a strong position as a survivor, as opposed to one of the fallen, is reputed to have discredited one of the dead – Colonel Durnford whom he maintained did not send distress messages to the main British force from the besieged camp.

Queen Victoria supported Chelmsford’s position, Disraeli who felt the Zululand incursion was always a mistake, had opposing views and this lack of accord may have contributed to Disraeli losing the 1880 election a year later.

Chelmsford, with Royal privilege, lived to the age of 78 and died playing snooker at his gentleman’s club in London in 1905.
Posted by Yiddo at 6:25 PM