The day after Brusselsblue’s birthday – October 17 – witnessed the passing of two peripheral bit-players from the large cast of players who had a trivial part in my theatre of life.

Milija Aleksic, goalkeeper for the 1981 Spurs team which won the FA Cup, passed away in South Africa at the age of 61. At Saturday’s match at the Lane he was remembered at half-time and Tony Galvin very nearly scored a major own-goal in stating that he was saddened by the news of the first member of the 81 team to pass away and hope there wouldn’t be ”too many more” – he rescued himself by adding the word “soon” at the end of the sentence. Everyone in the crowd, wanting to laugh but honouring the sombre mood, smiled.

On the same day Sylvia Kristel, who had a completely different set of skills to Milija, passed away in the Netherlands at the age of 60. 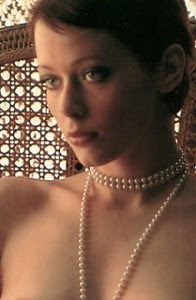 Famed for her lead role in the four Emmanuelle movies, in the early seventies she unobtrusively represented the alternative to the Catholic upbringing we had experienced in Ireland over the previous two decades. DH Lawrence and Lady Chatterley for the sixties generation: Sylvia Kristel and Emmanuelle for those of us coping with flagrant and open sexuality in the seventies. And coping with difficulty – a sneaked look at the advertising posters on Middle Abbey Street and walk on, Mad Mary awaiting on O’Connell Street. God be with the days.

Worrying that they both passed away in their (very) early sixties, isn’t it?
Posted by Yiddo at 1:48 PM