The Euros gave us the opportunity to spend some time in Gdansk and to visit the “Paths to Freedom” exhibition charting the rise of the Solidarnosc movement and outlining its’ role in liberating much of Europe from the grips of Communist Russia.

In touring the exhibition it is evident that the Poles feel slightly aggrieved that the defining moment in the collapse of Communism was the much-publicised knocking down of the Berlin Wall in early 1990, while in actual fact, the real battle to take on the might of the Soviet regime took place in the shipyards of Gdansk and commenced ten years earlier.

The inability of the Russians to achieve a decisive victory in the war in Afghanistan (their “Vietnam”) was a contributory factor in preventing them from adequately diverting resources to solving the issues of civil resistance created by the striking shipyard workers in Poland. Despite several years of martial law throughout the eighties, the civil disobedience continued and intensified and the Russians eventually had to concede defeat and commence negotiations with Solidarity towards the end of 1989.   With their power base shown to be penetratable, other repressed social groups across Eastern Europe went to work and in a domino-manner the corrupt dictatorships collapsed one-by-one in the matter of a few months.  Like thr Arab Spring.  Similar to the deaths of JFK and John Lennon, who cannot remember where they were when Nicolae Ceausescu was assassinated?   It was of course Christmas Day 1989 - I sincerely hope to fuck you were at home.

Anyway back to Solidarnosc and the start of the Olympic Games this week in London.

Competing in the pole vault in the 1980 Olympics, Polish Władysław Kozakiewicz was competing for the gold medal against Soviet vaulter Konstantin Volkov and during a tense head-to-head conclusion to the competition, he was subjected to a highly unsporting display of booing, hissing and jeering by the home crowd as he went through his critical jumps.

Having secured his gold medal position, Kozakiewicz celebrated with a gesture of defiance to the Soviet crowd which was captured by the photographers and transmitted all over Europe.  Its’ symbolism was far-reaching, representing Polish society's resentment to Soviet control in their country, and indeed all over Eastern Europe.

Solidarity in its’ modern form was founded one month after the Moscow Olympics and maybe this gesture assisted in rallying popular support to go against the adage that "might is right".

Per wikipedia, after the 1980 Olympics ended, the Soviet ambassador to Poland demanded that Kozakiewicz be stripped of his medal over his "insult to the Soviet people".  The official response of the Polish government was that Kozakiewicz's arm gesture had been an involuntary muscle spasm caused by his exertion.  Signs of attitudes to come.

Olympic Games, London 2012.    What underlying politics will play out - what will we fail to see, or more importantly what will we choose to ignore? 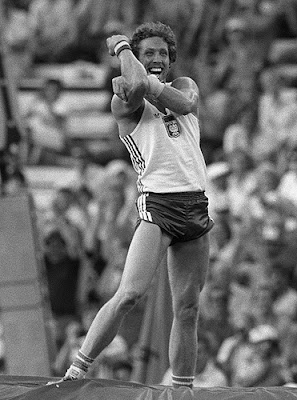