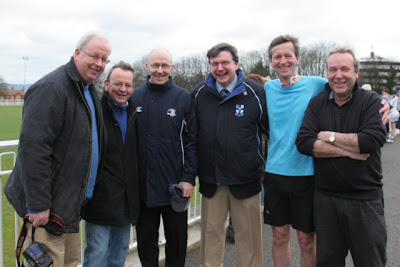 Under the watchful eye of Malachy (library - "stop laughing please Brian"), the Blackrock College legion of Mary re-grouped on Saturday morning and decided as a first project to pay a trip to the deaf boys in Brussels who don't seem to hear our pleas for more money. While it is recognised that this is a case of selective deafness, ("similar to the army" remarked Turlough the actor), it was nevertheless deemed to be a good cause because let's face it these poor boys have lost all touch with their roots and desperately need to re-establish some form of reality in their lives again.

IT WAS NOTED that Clancy, Coll and Murphy would do some work to try rehabilitate the deaf boy in the real world again.
Posted by Yiddo at 4:03 PM