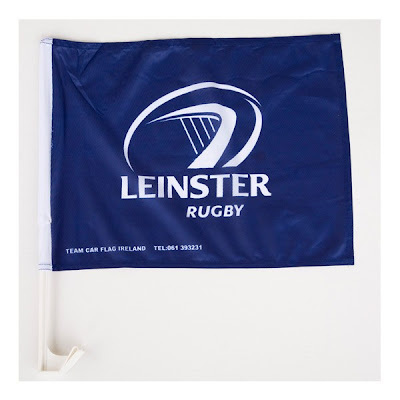 One of my pet hates in life – at present – are these hideous Leinster car-flags which seems to proliferate at this time of the year in South Dublin and in the more salubrious suburbs further North, id est Howth, Sutton and Malahide.

To be more accurate, it’s not the flags I find hideous, it’s the combination of the flag and the car occupants that causes me the greatest grief. Because let’s face it, Leinster rugby is quite simply nothing to do with the game, it’s all about the lifestyle and most of the flag-flying fans know sweet fuck all about the underlying sport.

The flags generally adorn four-wheel drives, year of registration within the last two – although there are signs that this entry requirement is being stretched a little in these troubled times.

The drivers of these vehicles add to the dysfunctional nature of Leinster rugby and have also unknowingly created a marketing dilemma for the automobile industry – how can an “off-road” vehicle be marketed to a glamorous trophy wife who needs a ladder to get into the vehicle and thinks parking on the footpath is at the extreme end of adventure sports?

The back seat of the car is usually occupied by two Willow Park schoolboys with their heads embedded in the screen of an Ipad; a copy of Rachel Allen’s newest Quickmeals cookbook; a Cavistons’ grocery bag containing white asparagus and quail, and a pristine Saxophone which had just been left in to the have the strings replaced. “Well I thought saxophones had strings”.

And what of the Lord of the Manor? A slap on the back from old rugby foes, the same foes that ran their studs down the side of your head and pushed his index finger in your eye on the back pitch in Donnybrook in 1987. Nothing serious enough to stop the business deal going through now though. “You know what you should get – a Harley – great for buzzing around in at the weekends”. Grow old gracefully you stupid prick.

Leinster rugby is the Celtic Tiger at its’ worst - spawned during those wasteful hedonistic days and surviving solely because everyone wants to be part of a winning team and sure if you don’t, they won’t want to have anything to do with you down at the golf club. And wasn’t BOD just bruuulliant against Stade de France?

So the next time I see these flag-toting idiots, I’m going to toot my horn and give them a wave – it’ll be lovely to see what they do when the see the cheery salute coming from a 2007 Ford Mondeo. A 2007 Ford Mondeo. And you know what, they’ll probably respond because it’s what the police drive and you never know when we’ll need a little favour, on the side, not a word to the common man.
Posted by Yiddo at 5:17 PM