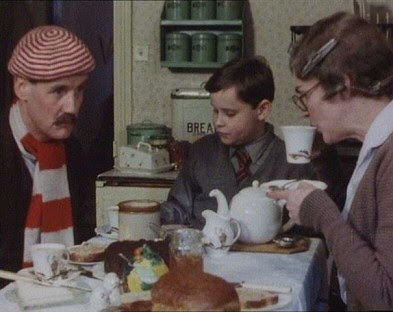 One of the great unsung heroes of the football world is undoubtedly Gordon Ottershaw.

Gordon who? I can almost hear you say, so please let me explain.


On the 17th October 1979 the world became aware of Gordon through the medium of BBC television. Gordon Ottershaw - the most loyal fan a team could ever have.

Immortalised by Michael Palin in Ripping Yarns, Gordon is the long-suffering supporter of Barnstoneworth United, a small-town football club playing in the Yorkshire League that has seen better days and is now in the habit of losing week-in, week-out. Gordon spends his entire life surrounded by everything Barnstoneworth, he has named his son Barnstoneworth, and he assists in his schooling by getting him to recite the entire 1922 Yorkshire Premier League Team instead of British Prime Ministers. However this is now 1935 and the glory days of the twenties are long gone. Gordon has therefore developed the habit of coming home after every game (always a defeat) and smashing the furniture in fury, while his poor wife tries desperately to tell him that she is pregnant.

The demise of the team comes to a head after an 8-1 defeat, when the club owner Mr. Foggen decides that the club should be sold to a scrap dealer. A crushing mill to be erected on the Sewerage Works Ground is to be named in the club’s honour. The upcoming match against Denley Moor Academicals is therefore to be the last.

Learning that the club only has four players for the final fixture, Gordon single-handedly rounds up the great 1922 team and arrives with them just at the last minute to allow the fixture to proceed. Amazingly, the Zimmer-framed team win the game with Neville Davitt scoring two “in't last minute” and Frank Haggerty saving a penalty.

Gordon is seen arriving home and the family smash the furniture together in happiness.


For the record the Barnstoneworth team on the day was as follows:

Candidates must answer any two from three questions (equal marks apply to all questions):

A. The story is set in working-class middle-England in the nineteen thirties. Describe the underlying family chemistry which would have been prevalent at the time, making reference to the text.

B. The story is a classic tale of a heroic Englishman fighting against the odds to make the dream come true. Discuss. In your answer, make reference to other comic-book heroes who entered national folklore through their sporting achievements i.e. Roy of the Rovers; Tuff of the Track or Billy (of Billy’s Boots fame and not to be confused with Billy, Don’t be a hero by Paper Lace).

C. How close do your own feelings for your team come to Gordon’s level of devotion for Barnestoneworth? Describe the key traits, referring to your own life experience, which makes him the nutter and you the sane man.
Posted by Yiddo at 6:45 PM