While the term Holocaust has broader significance (think Rwanda, Bosnia, Cambodia’s Killing Fields) the term is synonymous with the attempted eradication of the Jews in the Second World War.

Every few weeks I travel to the Lane and I exhilarate in the chants of Yids, Yiddo, or Yid Army - all generally sung at a time when things are going well on the pitch. The chants have no meaning to me aside from the fact that it is a badge of identity (excuse the analogy) as a Spurs fan and it is a collective statement of togetherness – us versus them in its’ truest form.

There has been long debate over the appropriateness of using the term in the trivial environs of football. It was adopted by the Spurs fans to describe themselves as a response to it being used derogatively by opposition fans at a time when football violence was rife and correct political standards, in many walks of life, had not been established. A curious side angle here is that some of the studies around the issue actually go as far as to lay a portion of the blame for the incursion of the term into the game at the hands of Alf Garnett, who was portrayed as an ardent West Ham fan and would frequently in aggressive tirades refer to his team going off to play the Yids. Probably not too far-fetched an explanation considering the type of programmes which ran on our TV’s at the time – Love thy Neighbour and The Comedians being two prime examples of “stuff you wouldn’t get away with now”.

For the present let’s lay aside the issue of the Yid chanting with a comment that the jury’s still out on whether it’s right or wrong. Certainly the Spurs fans re-claiming the term worked and it is far less unpalatable than might have been the case.

To Speak Up on World Holocaust Memorial Day it is far more appropriate to again call into question the behaviour of the buffoons who represent the game in the public eye and chose to behave with a total lack of respect to those of opposite race or creed. Recent events have highlighted this evil in the game – John Terry; Luis Suarez and Sepp Blatter – while the former two may hide behind the defence of “said in the heat of battle”, Blatter can make no such excuse.

And what of the biggest buffoon of all – Mark Bosnich – who hid behind the defence of ignorance and argued that he was sharing a joke with the Spurs fans and was really trying to make fun of Germans rather than Jews when he goose marched Hitler style around the penalty box at White Hart Lane. Why did he think it was more acceptable to insult Germans? But you know maybe his plea of ignorance was accurate – this was 1996, a few years after the heights of the Bosnian War, which involved the mass genocide and ethnic cleansing of tens of thousands of Croats, Bosnians and Serbs. Bosnich, though Australian, is of Croat extraction and cannot have been unaware of the atrocities being performed to and by his people in the Bosnian War. 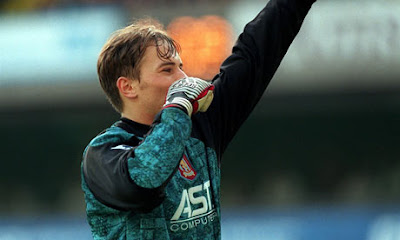 So this weekend we have John Terry, another half-brain, taking the field against Anton Ferdinand’s QPR. Playing for QPR will be Joey Barton (the twitter king), whose brother Michael is serving a 17 year sentence for the murder of a black teenager in 2005, and who himself has frequently courted controversy with his words and actions.

In summary two uneducated clowns given free license to run amok in arguably the prime TV viewing event of the weekend. Alf Garnett all over again?
Posted by Yiddo at 5:36 PM