Scorn not his simplicity 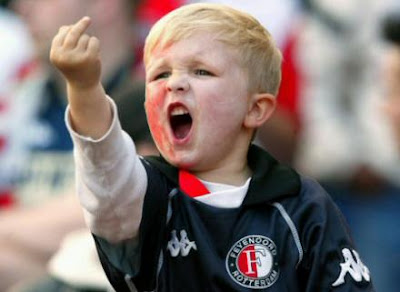 As I appear to have hit writer's block, and my invited guests did not respond with their own prosaic contributions, I have reverted to replicating evocative pieces of writing from the world of the web.

The following is a nice piece written by Simon O'Gorman on the nature of addition, to football in particular. It was published on 17 September on extratime.ie - that date being entirely relevant as it was the same day I had travelled to Salthill Devon in Galway to be part of a crowd of less than 100 people to see Waterford win 3-1 against the bottom-of-the leaguers, thus increasing their chances of finishing 5th in Division 1. (Longford lost 2-0 at home to Mervue that same night which assisted). A round trip of eight hours, on a day I had just arrived back from New York - to all the people, surroundings, familiarity (and players) that I love. The whole thing is slightly perverse but I'm not going down that route.

Instead we'll move on to O'Gorman's narrative:

It is my belief that the world's population can safely be divided into four categories. There are those that like football, those that dislike football, and those that are unaware of football. Then, finally, there is a small and worrying group that might be described as being addicted to football.

Those who are unaware of football are probably the happiest of the four groupings and if you are looking for a life partner I would recommend that you start here. They are likely to be emotionally stable, mature members of society who can teach you how to be a better person. They travel in order to see the world and to experience different cultures. When they go to London they visit the Tate Modern, not Brisbane Road, and when they are in America they seek out the epic highways of the west coast, Big Sur and the remnants of native American culture. They do not spend their time figuring out the time difference and looking for internet cafes where they can find out how Longford did against Mervue. The only black mark against these valuable human beings is that they may support the notion that at school sports days all children should get medals.

Those that dislike football, on the other hand, should be avoided at all costs. They are simply looking for attention. They will claim to loathe many things - cookery programmes, Bob Dylan and the Eurovision Song Contest, will all excite the ire of people who dislike football. But these positions will be held for no good reason other than that they are slightly surprising and counter intuitive. Such people will spend hours railing against the unwarranted wages of footballers while secretly hoping to win the lottery. They would use public transport more often, if only there was a decent bus service, and everything would be fine if it wasn't for the damned unions.

Similarly, anyone who likes football needs to have a sizable 'no fly zone' marked out around them. Football is not for 'likers'. There is, after all, nothing to like about football. It is a brutal land governed by extremity. Savage loyalty, hatred, fear and ecstasy are the ruling passions and if it were a film football would be Scarface, The Deer Hunter or Reservoir Dogs. People who 'like' football are more likely to prefer the films of Woody Allen or James Cameron and may even have a sneaking regard for Richard Curtis rom-coms.

Before I go on, I need to add an important caveat concerning football 'likers'. You will not know them by the manner in which they refer to themselves. People who like football will claim to love it. This is how they betray themselves. And it is one of life's enduring contradictions that those who genuinely love the game will seldom, if ever, express their devotion in such plain language. “I love football”... no, I don't believe I have ever heard one of the truly afflicted say such a thing.

All of which brings us to that category of human that can genuinely be termed as a football addict. These people are not proud. Nor should they be. Their lives, after all, are governed by the irrational and any healthy progression through the adventures that life has to offer is continually hampered by their dedication to one single and largely irrelevant aspect of it.

Football addicts will miss birthdays, anniversaries, births, weddings and funerals. And all because the lads are playing away to Crettyard United in the Leinster Senior Cup that day. Holidays to lovely, sunny places with golden beaches and a bar floating in the swimming pool will be sacrificed in order to pay for the away trip to Kazakhstan and pristine lawns will become wild meadows because the addict's time is better spent compiling statistics on such things as the number of Cavan born players to have scored in FAI Cup finals.

Entire winter days will be written off, simply gazing at a fixture list and when they are challenged by a loved one - “Have you been looking at that bloody thing all day??” - the addict will respond by quietly changing the subject, because they haven't just been looking at it, they've been dreaming about it, and that's something that non addicts will never understand.

While many will be entirely unaware of their condition (at least until it is forcefully pointed out to them by somehow who is vainly trying to share their life), those that are will make every effort to disguise the fact because they know that their obsession has made them less complete as human beings and that others have suffered in the process.

Addicts, real addicts, will not profess their illness loudly in a pub - those that do are charlatans - but, instead, they will shyly bat away any such accusations by telling some quiet lie or by making a conciliatory promise that they know they will go on to break. “I heard the game up at Harps was a disaster”, a friend might say, to which the addict will reply, “Was it? I didn't pay it much heed”. Did you not? So that wasn't you cursing the DJ on Highland FM for not going straight to the ground when you knew your lads had scored because the 'beep' on Futbol 24 had already told you so? And that wasn't you texting your mate, who now lives in Australia, that that bastard McHugh had only gone and scored against your boys... again!

And what about when your Missus asks if you'll be travelling to the game in Galway on the same weekend that her best friend is having her engagement party? You may tell her you probably won't bother with that one, but you and I both know that, come the day, you'll be pulling up outside Terryland Park at right about the time that the first bottle of champagne is popped.

A football addict is a shallow, inexperienced member of society. They are vestibules of shame and regret. They are people who carry a heavy burden of guilt and they seldom believe in the ultimate worth of their obsession. But they are also helpless because there is something about the game of football that that will not let them go. They do not love football, but they are in love with football. And they deserve our pity, if not our respect.
Posted by Yiddo at 1:27 PM