Why I hate Chelsea

This Luca Modric transfer shite is beginning to get to me. Opening up a can of worms.

I would like to know more about the behaviour of Modric himself to determine is he is part of the problem, or a naïve passenger in a high-level financial tragedy which is being played around him. There appear to be conflicting reports about whether the has formally asked for a transfer request – the only written evidence is below – and I hope that in the fullness of time it will be shown that he has behaved with a degree of honour and has left the matter for the clubs to sort out among themselves.

Somehow though, I do have my doubts.

If he does display the virtue of Wayne Rooney and push for the transfer, I hope he chooses his attaching language well. He needs to leave behind the verbiage of going to a “bigger club” or “wanting to win trophies”. If this is his belief, he should refamiliarise himself with the honours list and results for the last few years – a marginal difference at best between Chelsea’s underachievement and Tottenham’s perennial nearly-there status.

Luca would be better advised to state publicly that he has the opportunity to treble his wages and at the age of 28 he can’t afford to turn this opportunity down. If he has this honesty, then we might overlook the fact that he signed a long term deal at Tottenham only last season. The respective futures of the two clubs didn’t change that much since, even if the Yids failed to secure the Champions League spot.

Finally Luca, you might do well to remember Berbatov – yes while he did win a few medals on the way through, the more obvious result of his quest to play with a bigger club was a couple of seasons warming the bench at Old Trafford and the prospect of a premature move into the pre-scrapheap echelons of European football. Champions League my arse, see what it got you, you greedy Bulgarian tart.

And what do we make of Chelsea in all this? A tactic of manipulating the market by putting out feelers and getting the targets do the negotiating – not cricket so to say but nothing wrong with it either. No, Chelsea’s hateful traits are not related to either ethics or legality – it is all down to pure vulgarity. In a similar manner to what Ireland experienced in the Celtic Tiger, we have small men playing with big toys and brainless women wearing the finest bling. Chelsea’s signings are never determined based on an on-the-pitch strategy, but rather on who is the most expensive and “the best”.

For all the hatred I have of ManYoo, I have to admit is it based purely on their football dominance. Ferguson, unlike Chelsea, determines who he needs at the end of a season from a football perspective, and goes out and buys them. Their signings are part of a patchwork quilt which come the start of a new season always looks pristine and well designed. Chelsea generally spend the early part of the season working out who to play where, and how to split the toys between Drogba and Anelka’s cots.

As long as Abrahamovic is around, Chelsea will never be a great club.

I can’t finish this rant about the evils of money in football without widening the circle. Chelsea have recently been joined by Manchester City in the “Vulgar League” and their manipulation of the Emirates sponsorship deal to by-pass the Premier League’s financial rules on sources of funding, takes the hypocrisy and mockery to a whole new level. As long as the football authorities allow clubs like City to get away with this, the longer the debasement of the beautiful game will continue. It needs to be sorted out. 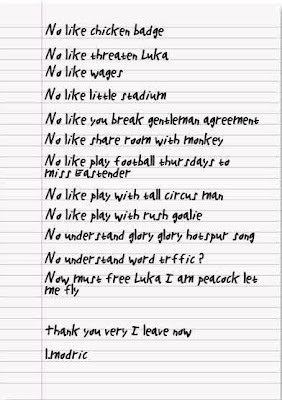