Money is ruining the game - even in the Championship 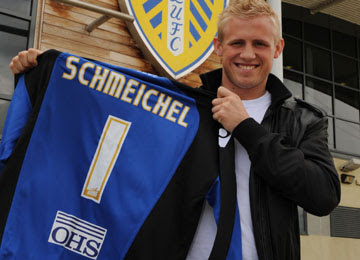 Even Leeds are not immune from the power of money in the modern game as today it looks like one of their better players will leave because of the financial and contractual issues associated with his employment rather than the football issues.

Schmeichel joined the club on a Bosman free transfer from Notts County thirteen months ago, has a year left on his contract and is now being sold for £1 million.

No doubt paraphrasing the words of Ken Bates, Leeds boss Simon Grayson stated: “We feel this is the right deal for the club. We spoke to Kasper’s agent at the end of the season about a contract extension and it was apparent that it was going to be difficult to agree a deal. Given the fact that he has one year left on his contract, we feel this is in the best interests of Leeds United.”
In other words take the money now and trade the club's football ambitions and aspirations for hard cash.

Schmeichel through his representatives said: “At the end of the season, Leeds United and I both made a commitment to honour the last year of my contract and try to win promotion. Therefore, it’s with great disappointment that I have learned that Leeds have accepted an offer from Leicester. I want to put on record that I have never asked to leave Leeds United, nor did I reject an offer for a new contract, since one was never put to me. I was enjoying being a Leeds United player and was looking forward to winning promotion this season with the club.

We too often blame greedy players for the financial malaise that has hit the game but this time the club must shoulder all the responsibility. All Schmeichel can be accused of is arrogance (a statement through his "representative" - why not deliver it yourself Kasper?) and total stupidity (I was looking forward to winning promotion this season with the club).

And by the way Leeds - if you're looking for bargain basement alternatives, too late for Brad Friedel - he's already spoken for.
Posted by Yiddo at 1:29 PM