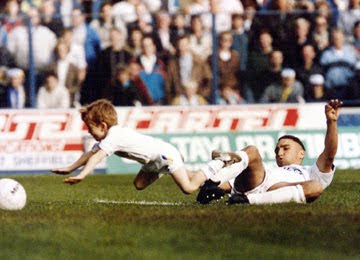 Not sure if this is an April Fools trick (don' think it can be) but I was browsing the Leeds United official website today and I came across a page where they were asking for supporters views on Leeds cult heros. Vinny Jones was mentioned and the above picture was shown - Vinny tackling a kid it would appear. Something very wrong here - if the picture is real, it's hardly the stuff of cultheros and if it's a photoshop job, it's equally dubious behaviour "creating" a picture in which a little kid gets a dose of adult hardman tactics.

While on the subject of photoshop, the correct use is shown below where the Man City squad picture was embellished to include Wayne Rooney, Diego Forlan and Zlatan Ibrahamovich (wishful thing from a City fan) and also Where's Wally who appears in his traditinal red and white in the fourth row (in case you were haveing trouble finding him yourself).

The picture appeared in the Aris Thessaloniki programme for their home game with City earlier this season. Classic stuff!