The irresistable charm of Peter Osgood 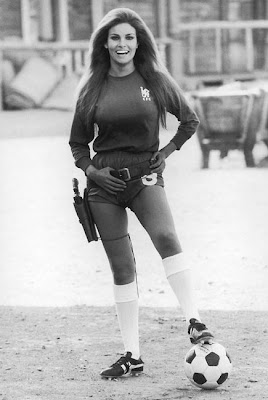 One of the great unsolved mysteries arising from seventies football is whether or not Peter Osgood actually gave Raquel Welch one in the dressing rooms at the Bridge after (or maybe before) a game during the 72/73 season. The tv cameras recorded the visit, it appeared on The Big Match , and let's face it - there really can be no other reason why she was frequenting the Bridge at that stage in her career - after all, he interest in the game did appear to wane as her acting career progressed. Acting career in the loosest sense of the word.

Maybe she will reveal all before she passes away but even if so, sadly we won't hear the real juicy bits as Ossie took his side of the story to the grave when he passed away in 2006. Long live the king.

Raquel wasn't to be the last doll to get the Chelsea kit on for a bit of frivolity as we remember Peter Mellor's friend, Antonia de Sancha who famously donned the home kit for the 1991-2 season to assist Peter get dumped from the cabinet. 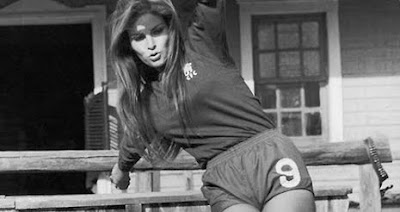