This is fucking sad

I must go out and buy the number 77 shirt, I must.

Ok Levy, cut the bullshit out - we've already got four sets of kit (one "worn exclusively" in cup games) and we really don't need to rob addicted supporters of another £50 by signing Beckham during his summer holidays and carting him over to the Lane to parade around with a number 77 emblazoned on his head, back, arse and tits during a few training sessions.

How much of the deal is Becks getting? 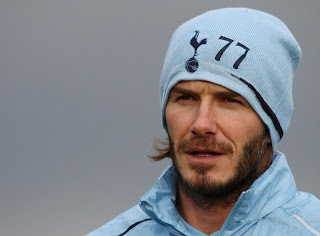 Alternatively, did we contract him to motivate us on the final run-in in arguably our best season for half a century? If so remember what Rodney Marsh did to Man City in 1972 and also look on youtube for Arshavin and the others celebrating as Russia were awarded the 2018 World Cup. Fat lot of good Becks did for the English bid. The Goldenballs thing is only a joke remember.

And finally Harry your complicity in the deal is worrying - if you want to solve the problem of Peter Crouch not scoring from six yards (poor quality delivery my arse), here's an alternative solution - get rid of Crouch, buy a proper striker and stop relying on the Dutchman.

At least the players new how to deal with the new arrival - below - "you're in the middle David and we'll stop after an hour". Pity they could never do that when they played against him. 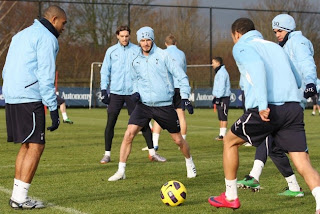