Magic of the FA Cup 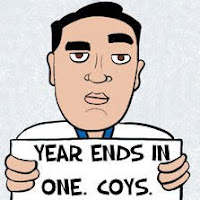 While we have the distraction of midweek league fixtures to get out of the way first, seeing as it is the first week in January our thoughts nevertheless turn to the upcoming FA Cup 3rd round fixtures.

In years gone by this would might have involved a trip to Liverpool to see Altrincham or Plymouth, but now that Rich Hudson can get his new coats in Marks & Sparks in Galway there's no real need for a repeat of the seventies pilgrimage.

Potential storylines involve Leeds winning and then not again until May; Ipswich conceding 5 and Roy Keane walking; and, for Brusselsblue, Tetley's putting the tea back in teabags. Good luck to all.

Finally, a little-known FA Cup statistic - Everton have the unfortunate record for the highest number of defeats in the final at 8.
Posted by Yiddo at 1:02 PM