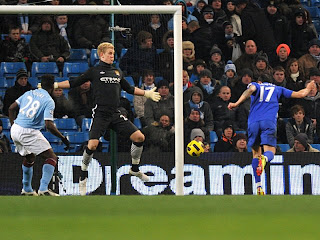 Well done to Tim Cahill for doing us all a favour last Monday night by inspiring the Toffees to a 2-1 victory over Man City. Assisting Chelski and Spurs, he also did Everton's chances of surviving another year in the Premiership no harm.

This was Cahill's 28th headed goal in the Premiership, which keeps him well in front as the most prolific headed goalscorer since the commencement of the League in 1991. Quite a record for a midfielder who spent several of his earlier years playing in lower divisions.

Don't you love the way Joe Hart made himself "look big" for this one. Text-book goalkeeping. Bring back Shay Given.
Posted by Yiddo at 12:04 PM