Magic of the FA Cup and Rochdale

At the start of the season, I decided to track Rochdale's results this season, a token gesture to acknowledge their second promotion in the history of the club, and only the second time that they had ever played outside the bottom division of the Football League. To date their results have been up and down, with the team currently nestling in mid-table in Division 1.

Last Friday night brought their notable season head-to-head with the fairy-tale season of another club - FC United of Manchester, the team formed and owned by the Machester United supporters who objected to the take-over of the Old Trafford giants by the Glazer consortium.

Now in existence five years, FCUM play their football in the Northern Premier League. Their progress this year in the FA Cup has been remarkable, and on Friday they came up against local rivals Rochdale AFC in the 1st Round Proper. A 3-2 win with a controversial goal in the 93rd minute now leaves them with one round to negotiate before fate will surely play a part and they will be drawn at home, in the third round to who else but Manchester United. After that, the rest will be history.

The controversial winner came amid claims that the goalscorer, Norton, has kicked the ball out of the Rochdale keeper's hands before scoring. Shades of George Best and Gordon Banks at Windsor Park. 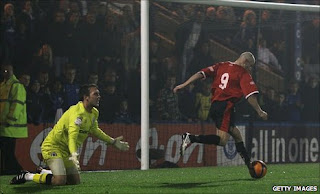 In the 2nd round FCUM have been drawn away to Brighton or Woking who drew 0-0 on Saturday.

An interesting footnote to the game is that the match was shown live on ESPN, who paid FC United of Manchester £67,000 for the rights. The money, which starts to inch FCUM away from their amateur status and into ranks from which they fled, is to be used to build a new ground for the club.

Let's hope the underlying ethos remains the same in the new location and that ESPN and Sky and whomever is next, don't go spoiling the dream in the long-term.
Posted by Yiddo at 1:56 PM