All the hullabaloo about Wayne Rooney's extramarital activities, and his lack of respect for the England supporters at the World Cup, hide the truth behind why his return to Goodison today would have been such a torrid affair. 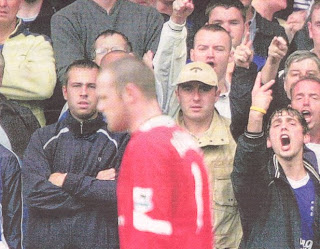 The reason why Rooney is hated on Merseyside goes back to Hillsborough and his subsequent decision (admittedly several years later) to sell his story in an exclusive to "The Sun", the newspaper which had lied and made scurrilous observations about the behaviour of the Liverpool fans on the day of the Hillsborough disaster.

"The 18-year-old's decision to sell his life story - 'world exclusive' - revelations that he and his fiancée love each other, watch EastEnders and have a dog called Fiz - for £250,000 to the Sun and its sister paper, the News of the World , was guaranteed to test his folk hero status like nothing else. As in 1992, when Liverpool manager Graeme Souness took the paper's shilling, radio phone-ins were jammed. Fans wrote letters or emails saying they were 'sickened'. Red-blue rivalries on the field were irrelevant: Everton and Liverpool fans are united in hatred of the Sun.

Leading the condemnation of the deal is Jimmy McGovern, writer of the TV drama documentary Hillsborough. He said last night: 'Footballers today are on massive wages because 96 fans died at Hillsborough and Lord Justice Taylor had to drag the game into the modern era. Footballers should never forget it. Local lads especially. Locally born footballers have an enormous responsibility to the Hillsborough dead. That is hard, I know. They are only young men. But, tough, they have it. So for Wayne Rooney to sell his story to the Sun is a disgrace.'

It was nice to see Everton's comeback knock the wind out of United's sails today with the two late goals. It was an awful shame Rooney wasn't there to do the walk of shame to the dressing room after the game. Hopefully, hopefully - another time.
Posted by Yiddo at 2:29 PM