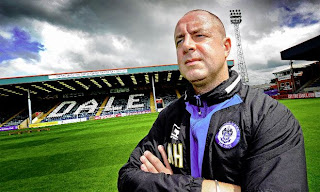 Great piece of journalism in the The Times on Saturday featuring Rochdale's first game in Division 1 following their hard earned promotion last year. You might remember that at the end of last season they earned only the second ever promotion in their history and that they have spent 85 of their 89 football league years in the lowest division.

I now officially adopt the Dale as the fifth team for Churchdoor interest focus for season 2010 /11.

The Cemetery Inn will spark to life at lunchtime today. Dads and lads and mums and girls will saunter in, jackets over their sleeves. They'll nod to one another and utter the legend, "Up the Dale". These three words only make sense if you are one of the chosen few, a devotee of Rochdale AFC. Then, they mean everything. They frame you as a supporter of your hometown football club, a champion of the underdog, someone who is loyal and steadfast.

Today is the first day of a new Football League season, when the pitch shines green, and hope is as tall as a floodlight. For Rochdale fans it is an especially beautiful day. After they've supped their last in the Cemetery, and made their way to Spotland, they will see their team playing outside of the basement division for the first time in 36 years, following last season's promotion to npower League One. To those, like me, who have followed the club since we were knee-high to a mill worker, and who have endured decades of failure, it feels, at last, a fair and apposite reward.

Over the years I have been made aware of our "rightful place". I'm a' realist; I know the pecking order. This week, however, it-all went awry. "I'm actually a bit jealous of you," said my Liverpool-supporting friend. "You get to see proper football, and it's your club." I know what he means. The football is "proper". It's played by blokes on wages not dissimilar to those earned by a decent proportion of the crowd. They run around a lot; they get stuck in. If any of them resort to diving or ref-baiting, there's usually a fat bloke in an anorak slavering at the perimeter fence, telling them to grow up, yer big jessie. Or worse.

The bigger issue perplexing fans of Premier League clubs is the metaphysical question of what actually constitutes a football club. If your team is an assembly of foreign players, and your club is owned by, say, the Chinese Government or a Saudi tycoon (or a Russian oligarch - Ed), what are you actually cheering for and believing in? How disheartening it must be to see your club, which may have been passed down through generations of your family, turned into a magnate's trinket or (clench your teeth) a portfolio extension. Sure, it brings instant wealth, but these benefactors cut a cute deal. They want exposure, profit and ego fulfilment, none of which form the natural constituency of football support.

When Thaksin Shinawatra became the owner of Manchester City, he put a photograph in the boardroom of himself with his junior football team, next to various shots of cup-winning City sides. No one dared point out how sacrilegious this was for fear of him not buying another Brazilian show-pony..................

Unfortunately Rochdale itself is on its knees. Some districts have 75 per cent unemployment. Businesses and shops are closing at an alarming rate. The football club is the only flag to which we can rally. Many gave up on the club years ago. The rest of us, the believers, view a trip to Spotland as a chance to pass through a portal, to leave behind the muck and grime, and enter another world, where a game such as today's, against Hartlepool United, is a bonfire of faith and hope.

It is easy to become sentimental about lower-league football, to focus on the pie and peas, mud' and thud. Many eschew it because they prefer the greater technique of players in
higher divisions, and are prepared to pay the higher admission. Excessive TV coverage has atomised football so that we see individual pieces of ornate skill that are thrilling in themselves, but largely ineffectual in the overall game. At our level, a team has to he true to its name, and muster a collective effort that surpasses the opponent's. It feels evenly matched, and is therefore more absorbing.

What Rochdale fans share with Liverpool or Manchester City is addiction. This is our greatest strength and weakness. We love our clubs unconditionally, and we put up with outrageous mistreatment.

But those Premier League supporters are now seeing their power recede as the income they supply to their clubs is eclipsed by that from commercial sources. Where they were once the lifeblood, they are now the periphery, extras to a feature film that has profit accumulation as its leading man. Many understandably feel cheated. From the first time we hear the click of a turnstile, we learn the legend of our clubs, former players and glories. We are led to believe that we form part of its fabric, but this is largely a fallacy: we are expendable in the greater scheme.
Rochdale, in its 103rd year, remains, for now, largely unchanged, but if we are to garner more success, we too will have to court outside agencies and see the distance between fan and club expand. Until we face this dilemma, alongside fans of bigger clubs, we must look around us, to fellow fans, the streets pressed close to the ground, the atmosphere we create and the emotions we share, and think that this is our football club, this is us, always has been, and it can't be bought.