Thankfully the Premiership (and other related divisions) are up and running again and the long wasteful nights around the fire listening to Peig being read are over. 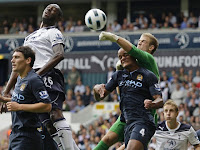 At the Lane yesterday, it was genuinely hard to see how City will qualify for the Champions league next year, not to mind win the League, so comprehensive was Tottenham's dominance. Were it not for Hart's display Spurs would have won by four or five and it augurs well for us, particularly if 'Arry can do a few pre-deadline deals (or post-deadline if you know what I mean, knowing Harry). 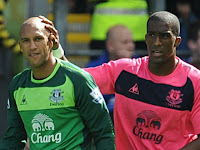 Everton certainly looked pretty in pink but until they get a decent striker, they will continue to "average-perform" in the "just-off the leaders" section of the table. Howard also can't afford any more of the circus acts like the one he performed yesterday. Too much is expected of key players like Jagielka, Cahill and Arteta, and unless the rest start raising their mediocre game, they may struggle to achieve Europe. 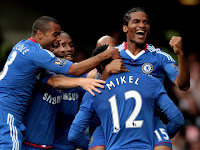 Chelsea had a good start but let's remember it's West Brom they beat. Still the title must rest between themselves and United and I have a stronger feeling about United shading it this year.

Leeds have a single point after both the Brian Clough nostalgia trips - Forest and Derby. Looks like consolidation will be the best that they can achieve and having watched portions of both games, I have to conclude that they look quite ordinary. Also I'm still not sure of Simon Grayson's calibre as a manager. They'll need to oput soem form together and find a goalscorer, to challenge for the play-offs.

Anyway good luck to everyone this year and we'll talk as we go along.
Posted by Yiddo at 5:35 PM