Ok time to get posting again and let's start by looking back at some of the winners, losers, high points and low points from the World Cup.

Starting with the losers:

Rooney - delightful to see him flop totally and then lose it in front of the TV cameras, castigating the fans who effectively pay his wages. A prime specimen of low life this boy. 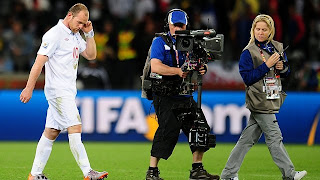 France and their Manager - the team's performance and their manager's refusal to shake hands with Carlos Perreira after the defeat to the Bafana Bafana confirmed what they were - a bunch of underperforming cheats who were unable to accept defeat and humiliated themselves on the greatest football stage of all. The biggest regret was that they took the place of an Irish team of average ability who would no doubt have done the World Cup proud. 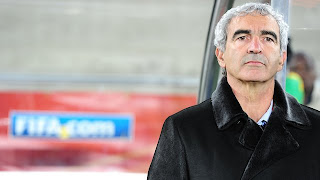 Luis Suarez - the Uruguayan marksman's shameful display of gamesmanship in denying Ghana a last minute winner and turning tears of shame to tears of joy typified the type of behaviour that we associate with Uruguayan (and South American - Brazil excluded) teams. The competition needed an African team to progress and Ghana were deprived of a semi-final place by Suarez. 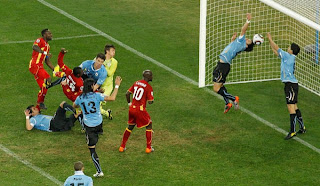 The viewing audiences - for two reasons. Firstly, being deprived of the chance to see Jimmy Jump's audacious attempt to lift the World Cup by the South African TV Broadcast Controller who decided to censor it. The world needs more people like Jimmy and less people like the fat controller.

And secondly, for having to listen to the Vuvuzuelas. Bloody great if you're in the Stadium blowing them, but less attractive coming from the 20 inch Ferguson in the corner of the living room. 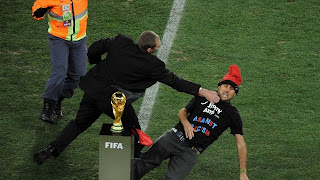 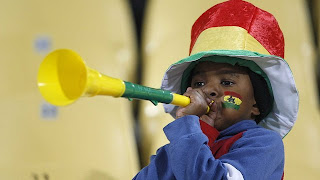