The gauntlet was well and truly thrown down in the esteemed surroundings of the quadrangle as Rockface Murphy delivered a stinging attack on what he dubbed as "foreign poets" who were afraid to return to their native seats of learning to put their "Enid Blyton poetry" before true critics who understood the finer points of the written word. 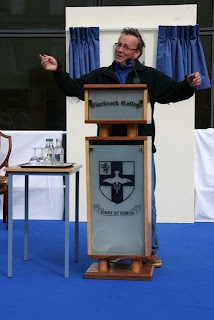 In a highly impassioned twenty minute delivery, Murphy castigated the Salman Rushdie approach of his main critic, hiding from the people in a virtual isolation, afraid to come before the masses and allow his "beach-ball poetry" to be critically assessed. To rapturous applause, Murphy left the podium and was lauded on departure by the school's most famous alumnus from the art of theatre, Turlough O'Brien. O'Brien concluded his dialogue and tribute by stating that he too had been subjected to inappropriate criticism at times during his career from the same quarters but had stayed the pace to achieve his rightful recognition and he felt Murphy would do the same.
Posted by Yiddo at 9:59 AM