I was always Illya Kuryakin

The choice wasn't a difficult one - it was always Illya Kuryakin for me. Even the name sounded better than "Napoleon Solo" - or was it that I had unfortunately already seen Robert Vaughan in the Magnificent Seven and I just couldn't easily transpose him from the back of a horse into a superpowered Lamborghini, with machine-guns for exhaust pipes? 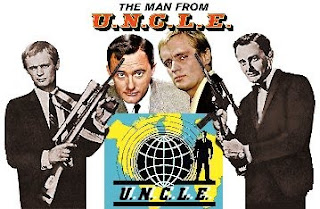 Eitherway there's was only one option for me and vaulting over the front hedge in Stillorgan (tea-time beckoned) it was far cooler to think you were the mysterious Russian spy-par-extraordinaire rather then the silk and suave American packaged superhero.
In addition to the badge and an identity card, you got a pen with invisible ink which proved to be very useful for not doing your homework.
Pure escapism in more ways than one.
Where the Man from Uncle arguably failed however was in the area of “enemy” – it was really hard to get excited about the challenge posed by Thrush, additionally so if someone in your family was complaining that the real problem with Thrush was the itchiness it caused.
Their fabulous memory lives on and lest we ever forget their enduring legacy, take a short trip back in your minds, just a few months, to the Fianna Fail tent at the Galway Races. Take a quick glance around and observe the widespread use of invisible ink pens, in the hands of fat greedy builders, as they appear mysteriously to leave the payee section blank on the numerous and significant cheques they are writing. Then, if ever, we so badly needed the guys from Uncle with their trusty machine guns.
Posted by Yiddo at 1:58 PM