As teenagers and in our early twenties, most of us owned up to our inebriation and indeed our honking (Champions league winner - Gerry in Annabels - top of the League then and top of the League now) but the man from Brewery Road was always different - the sinuses always got him before the booze did. It got so bloody repetitive that we actually began to believe it.

Here' a close-up picture of the sinuses strinking the great man very early one night in March 1982. He recovered a week later. 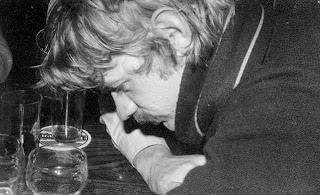