Wrap the EU flag around me, boys 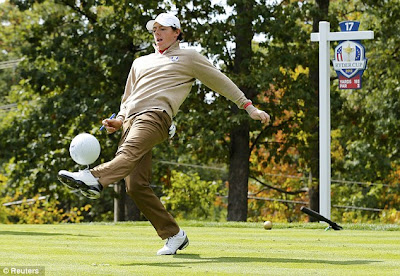 Watching Rory McIlroy eagerly grab and drape the EU flag around him a few weeks ago at the Ryder Cup only sought to heighten the controversy surrounding his reluctance to do the same with the Irish flag after winning the US Open in 2011.

While his decision to lean towards representing Great Britain rather than Ireland in the 2016 Olympics is his own decision and needs to be respected, his reluctance to “hold” or “be in contact” with a flag which has such significance and relevance to a large part of his family, his community and his country, is at the mildest baffling, and at the most extreme downright insulting.

It is not as though McIlroy does not understand the significance of his decisions – he was brought up a Catholic in a protestant area of Hollywood and he lost his uncle, also a Catholic, murdered by the UVF in 1972 as part of the backlash against minorities who had inadvertently crossed the divide by living in the strongholds of the other religion group.

A simple comparison could be made with the boxer Wayne McCullough, a Protestant from the staunchly loyalist Shankill Road area of Belfast who was equally as proud to carry the Tricolour at the 1988 Olympics Opening Ceremony (where he represented Ireland) as he was when carrying the Northern Ireland flag at the Commonwealth Games two years later. At a time when political feelings were more acute, McCullough had the sense to understand the issues and sensitivities involved and to do the right thing.

The cynics might seek to argue McCullough, a mere streetside boxer, did not understand the import of his actions but the flip-side to this is that McElroy, the educated golfer, did.
Posted by Yiddo at 2:17 PM