Following Euro 2012 there was a strong call (which included my vote) to get rid of Trappatoni.  He was stubborn, wouldn't bring new blood in and was unwilling to change tactics.

So he goes and changes, brings in some  of the younger players, changes the formation and hey presto(n north end) we lose 6-1 to Germany in our worst home defeat since 1931.  Coming on top of a narrow and undeserved victory in Kazakhstan a month ago courtesy of two last minute goals.

While I still want him to go, with John Delaney, I find the increasing vitriol against him inappropriate and I fully accept his argument that the players are not at his disposal as they were in the old days.  Bringing in Coleman, Fahey, and Robbie Brady hardly upped our spirits as we sat in our €60 seats to watch Germany take us apart.  At least it was €0 Angela Merkel wasn't going to get paid back.

Contrast the Irish team on Friday with the team which faced France at Lansdowne in 1981 as part of the countdown to the Spain World Cup. 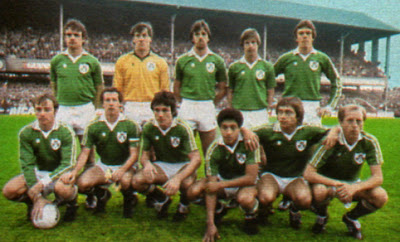 Certainly very different quality from the eleven that started on Friday.

So let's be rational in our criticism of the Italian - he is not wrong in stating that it very nearly became a positive night for us, with Austria dropping points in Kazakhstan and Sweden only getting by against the Faroes by the skin of their teeth.

A stronger team tonight - slightly - but let's get the job done and then lets' get the most powerful man in Irish soccer - Denis O'Brien - to make the decision we all want.

Oh Trappatoni, used to be Irish,
but he's Italian now.
Posted by Yiddo at 2:21 PM