What the hell has happened to Chelsea? 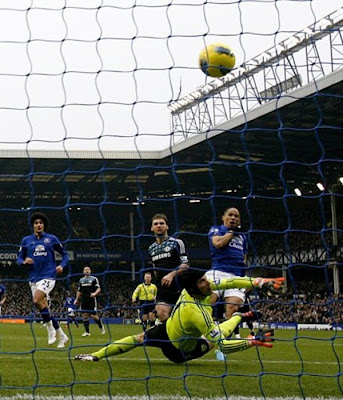 Not to take anything away from Everton, who have a laudable record against the top clubs particularly at Goodison, but following Chelsea's capitulation on Saturday you really have to start wondering what the hell is going on?

Currently fifth in the table, with thirteen games to go, their challenge now has changed to qualification for the Champions League rather than getting into the top three. So where has it all gone wrong?

Several potential explanations and probably a combination of these has resulted in them falling from grace. Is it that:

They have a manager who appears incapable of adapting to the English game, or who is overawed by it?

Their billionaire backer has lost interest in his English leisure pursuit and may be under pressure at a political or litigious level?

The over-influence of poor role models such as John Terry and Didier Drogba has impacted team performance and morale?

There is an argument to be made that they are still in the Champions League and the FA Cup, but even so there can be no doubt that by their own high standards, this year is a huge disappointment.

Receiving the despairing e-mails from poor Chelski on Saturday afternoon as I strolled around rainy Waterford, ducking in and out of Paddy Power's, nearly had me looking for the number of the Samaritans to pass on t0 him. As he gazed out into the blizzard miles away in Northern Sweden, I had visions of him staggering out of the hotel into the gale-force winds, while muttering something along the lines of "For God's sake look after the children".
Posted by Yiddo at 1:17 PM