'Arry, Rosie and the Law - from the Colonel 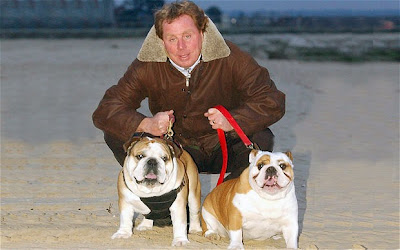 Well that was exciting! How we all laughed as poor ol Arry was forced to grovel before the bar of public opinion. We howled at references to Rosie 47 and his proud boast that while being a "phantastic manaja" he could not write (Arry that is and not Rosie - although presumably his canine partner in crime is equally challenged when it comes to putting his thoughts on paper). The key actors even got their lines screwed up as the Slav said it was one thing and Arry screamed it was another. In fact Arry did a lot of screaming. He screamed at the Detective leading the investigation that he was to stop "staring at me". The pantomime was complete when the curtain came down with a resounding "not guilty". Fair enough. We have a jury system so we cannot and really should not challenge or scoff at it's findings.

The circus has moved on and a Mr Suarez has entered stage right and is now the focus of the media. Forgive me therefore if I linger a little longer in the High Court with the evidence of one Mr Harry Redknapp formerly of White hart Lane, 3 Sisters North London.

Harry went to great lengths to explain to the simpletons in the jury how "football" works. If Arry was able to sell a player for more then he bought him then he was entitled to a share of the "profit". Sorry Arry - run that by me again. Arry was given a financial incentive to sell on players! Why? Incentives are there to encourage a particular type of behaviour. In the world I live in such behaviour must be of benefit to the person or entity paying the incentive. Are we to infer that Portsmouth Football Club (on the verge of administration) really considered it to be in their interests to have Arry run his skilled eye over the human assets belonging to the club and then proceed to sell those where he thought he could turn a sizeable profit. Was West Ham delighted when Arry picked out Rio Ferdinand and like some Arabic slave dealer of old announced that he could get a good price for the "Big Guy" at the back. Were they of the view that without the "incentive" Arry might have sold on the cheap? Did nobody say "Mr Redknapp you focus on the game next Saturday and the club will value its own assets if it becomes necessary to sell them"? Did or does nobody recognise that an "incentive" to sell creates a clear conflict of interest. Did or does nobody question why all the fee should not go the club that has nurtured the player since he was 16. Did nobody suggest that Rosie & Arry were already drinking deep at the none too deep well that was Portsmouth Football club.

One thing is for sure, Spurs supporters can be confident that when Mr Bale moves to a warmer clime they will get a shed load of money as result of Arrys standard agreement with his employers - but can they be ever confident that Arry will snub the sale in favour of trying to persuade the player to see out his career at WHL. As Arry himself would say "not on your nelly".
Anyway the show is over. Let move on.

Ed. - when Spurs release Bale, and it really appears that Levy, will decide this and not Arry (after the Modric success), well maybe just maybe they'd be happy to split the proceeds with the raincoated cigarette-smoking tout who screws the diegos rightly.

Ok, maybe not glamorous bank-rolled attractive Spurs when selling the crown jewels, but what of a small unfashionable club down on the south coast of England offloading Peter Crouch for £4.5 million? Not so much of a conflict of interest (90 for you, ten for me), but more of a let's work together to part this fool from his money. As long as people like Abrahovic, Mandaric and Sheikh ManCity are in the game, this kind of questionable behaviour will continue. Let's get back to basics.