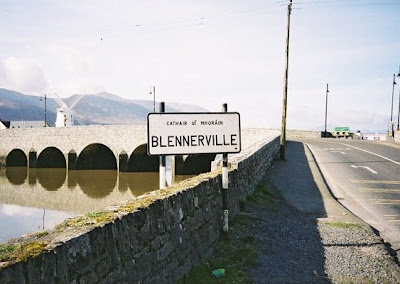 The recollections from Blennerville begin to worry me.

I do know that four of us travelled by plane, during which we took the opportunity to steal the Aer Lingus pillows which we realised would come in very useful - now that we had made the upgrade from An Oige hostels from the year before to the independence of camping in our own right.

From memory I then travelled from Shannon to Blennerville with Steve, Rich and Noel where we were to await the arrival of the rest of the group the following day.   Communication to confirm arrangements can only have been by phone box, with a Press Button A to connect.  A four man tent or two one man tents I don’t know but after a bright afternoon which generated endless repetitive games involving a ball, and then the onset of rain, we sought to shelter hopelessly in the tents, with a forced retreat to the centre of the enclosed area in the hopeless intent on staying dry. A useless pursuit.

The following day, the others arrived (Train to Tralee?) by which time we had engaged with the locals and had secured accommodation in the local outhouse, straw, cowshit and all. The only thing missing was the Baby Jesus.

The openness and generosity of our hosts now appears wondrous and alien, yet then it was commonplace. Their house was made free to us although in retrospect it lacked a lot - I cannot recall there being an open fire, nor brownbread or a dog, not even a parent keeping an eye over things. Very peculiar. Tubular Bells was scratched - and we of all people appreciated a good LP - but it didn’t stop Roddy Wood chatting-up the good-looking daughter, a chase orchestrated more for our wonder than his own benefit I now suspect. Roddy always performed better when the subject of voyeuristic envy on the part of others.

The outhouse had its’ own inhabitants, small white microscopic mites who found an attraction to Brian’s mountain boots. The boots saw little of the following morning, so deep was the infestation.

And you know what – after that eventful and difficult start to the trip, the rest is genuinely hazy with only fleeting memories of places we went, people we met and events that occurred. It was the summer of 1975, and I have memories of being outside a Church on a Sunday morning and reading about (or hearing about) Arthur Ashe beating Jimmy Connors in the Wimbledon mens final.

We also slept on solid concrete in a boatshed, courtesy of Barry Fenton, who slipped away the following morning under cover of thinning darkness. Aside from this – little remains in the memory – no pubs, no bikerides, no ceilis, and no stolen potatoes. I sincerely hope that that’s the way it was and not a fabulous, youthful, energetic fun-filled escapade which old age will no longer let me remember. Please, oh please.


You are invited to help the author in his fight against dementia by submitting other recollections of this particular holiday to him by email.
Posted by Yiddo at 2:06 PM