So, it's over and Spain run out as deserved winners.  Well done to all our Spanish in-laws. 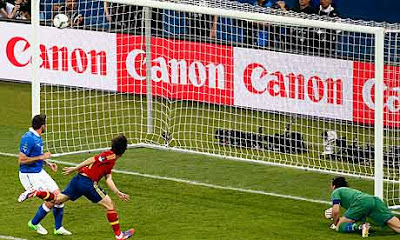 In closing I'd like to record a little-known fact about the history of the competition.  The most recent goalscorer in the long line of celebrated players is Mata but the first goalscorer ever was our own Rashers Liam Touhy, who scored after 22 minutes of our home game against the Czechoslovakia on the 5th April 1959.   This was the first game in the newly formed Henri Delauney Cup for European Nations.

In a home and away series to determine participation at the 1960 competition, we won 2-0 at home, only to concede four without reply in the away leg.  And so commenceth our familiar habit from the sixties and seventies of getting turned over in away fixtures.

Still, the notoriety of scoring the first goal will always rest with the Rasher, the man who later in his coaching career, gave Mise le meas the hard news that he was never gonna be a star.   Arise Sir Rasher.