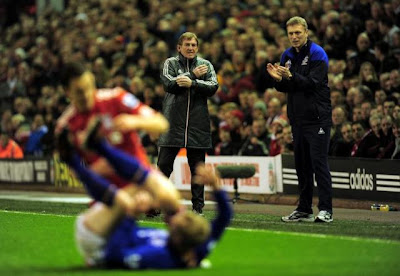 And what of Everton this week? An abject performance against Liverpool and further proof that they appear to be able to do everyone a favour except themselves. Victories against City, Chelsea and Spurs are laudable but must be viewed in tandem with countless derby failures over the years and poor results against weaker teams - this season home defeats to QPR, Bolton and Stoke and draws against Blackburn and Norwich have cost them 13 points. Thirteen points would put them above Chelsea and in Champions League contention.

And then there's the debate about Moyes and his future at the club after ten years. Rumour suggests Spurs are likely to come knocking once Harry follows the yellow brick road. Does Moyes want to aim for something higher or is he afraid of a challenge which no longer has the excuse trapdoor of "no funds available".

His coaching style is apparently totally contrary to Redknapp's, focusing on discipline and rigidity in structure. Harry as we've seen with Bale and Van der Vaart prefers to allow his players greater flexibility in where they go and, as evidenced by his continuous decisions to play Modric out of position, expects the players to be able to adapt to the situations evolving around them. Moyes is regimented, Harry flamboyant and I'm not talking here about paying taxes.

I have to think that Moyes to Spurs would be a bad match for both parties - Moyes is too honest and genuine a man for Spurs, and Spurs are too good a footballing organisation for Moyes. Neither deserve each other. Hopefully sense will prevail.
Posted by Yiddo at 1:23 PM