The King is dead, long live the King 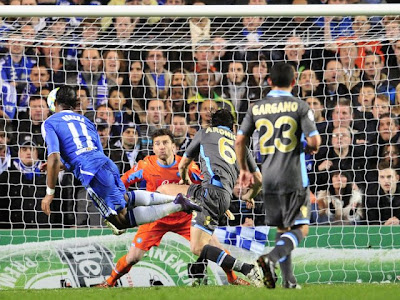 Are Chelsea not getting a little bit carried away over admittedly fine victory over Napoli yesterday evening. Let's face it - recovering from a two goal deficit, with the added psychological benefit of an away goal, against the fourth placed team in Italy shouldn't be beyond the aspirations of the top five or six teams in England.

I have to think the verbiage from Terry and Lampard wasn't about the game last night, but a parting shot at AVB and a message to all about who's in charge at the club. Certainly watching Terry give the tactical instructions to the team following his substitution, while Di Matteo stood there transfixed, was fairly indicative of the power balance and to the "neutrals" among us was the only sour aspect of an otherwise enthralling encounter.

Good luck to Chelsea in the draw tomorrow.
Posted by Yiddo at 1:09 PM