Irish attitudes to Sepp Blatter (and FIFA) are largely shaped by relatively visible matters – his derision of the FAI’s request for a replay post Thierry Henri 2009; his incredulous comments on the Luis Suarez racism ruling and his inability to kick a football (see below) while at the same time presiding over the complete footballing destiny of the global game. Ok while we might forgive him the latter, he will still be a prick in our eyes for many years to come.

And you know what - we’re not wrong. In fact if you scratch beneath the surface, there is far more damming testimony against the most powerful man in football.

We start with his refusal or at best tardiness in introducing goal-line technology. This apparently is down to the voice of the smaller (read poorer) nations who have pleaded inability to incur the costs associated with introducing it in their leagues. 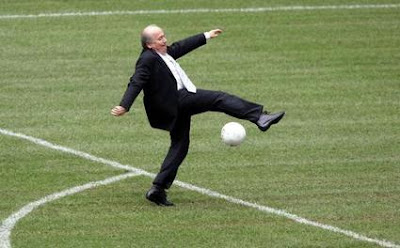 You begin to wonder whether the smaller nations should have so much influence over a matter which is clearly for the game’s good.

You then look at the awarding of the World Cup’s during Sepp Blatter’s reign as President. He took over in 1998 and was responsible for the awarding of the event from 2006 onwards. Let’s track that and let’s measure it on the World Democracy Index – Germany to (14th place) to South Africa (30th) to Brazil (47th) to Russia (107th) to Qatar (137th). We end up in a nation where ruling power stays within the one despot family, where bribery and corruption is the order of the day and where basic human rights are denied to sectors of the population. Think Bahrain all over again.

FIFA has been progressively sliding down a slippery slope in terms of who is goes to bed with.

You then look at the behaviour of the FIFA senior executives over the period of Blatters reign and we begin to deduce that maybe partnering with countries and leaders of lesser repute actually suits their character. Deals involving corporate kickbacks, bribery and personal gain, and the buying of key votes amid ruthless internal power-broking are all well evidenced in the recent history of FIFA.

And why did the FIFA Executive Committee take the decision to award both the 2018 and 2022 World Cups this time out – answer because the average age of the committee is 65 and the majority of members realise they may not get elected again. Their ability to pursue personal gain and favour will be lost so they may as well conclude as many “arrangements” as possible before they go. So we end up with a World Cup in 2022 which may have to be played in atmosphere controlled stadia, where fans will be prohibited from drinking and where gays “in flagranti” are liable to be imprisoned for years.

Quite simply, as an organisation FIFA has sold itself to the devil. While it cosies up to despot rulers and multinational corporates in the interests of commerciality, tens of thousands are forced to involuntarily “re-house” in the poorer areas of Johannesburg; Nelspruit; Rio de Janeiro and those other cities which were “lucky enough” to be chosen to host new stadia.

FIFA reminds me of the Fianna Fail of old, the Fianna Fail before the clear-out. An executive committee significantly detached from the people it represents (the grass roots), trading core human values for commercial success, and run by a megalomaniac who no doubt be proven to be as corrupt as the partners he has chosen to dance with. Speed up his departure, please.

One of the strongest voices to date (aside from churchdoor) on this matter has been Mise Le Meas’s friend, Karl-Heinz Rummenigge, Chairman of the European Club Association, who openly attacked Blattter openly in the aftermath of the Qatar World Cup decision and associated scandal.

'I don't accept any longer that we should be guided by people who are not serious and clean,' he told the Guardian. 'Now is the moment to intervene. Because knowing something is wrong is an obligation to change.'

'It's not just the top clubs, it's all the clubs,' he said. 'Sepp Blatter is saying that he is cleaning up, but the fact that no one believes him tells you everything you need to know.

'I'm not optimistic because they believe the system is working perfectly as it is. It's a money machine, World Cup after World Cup. And for them, that's more important than serious and clean governance.'
Posted by Yiddo at 6:13 PM