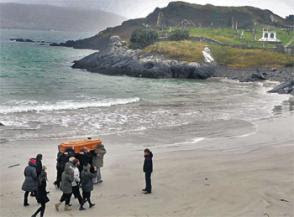 Descendants of the Liberator returned to the ancestral home yesterday for a family funeral.

Una O'Connell (85), who was married to the great-great- grandson of Daniel O'Connell, was buried in the family tomb on Derrynane Abbey Island in Co Kerry.

Born in Essex, Mrs O'Connell spent most of her life in London. However, she was introduced to Derrynane by her late husband Dr Daniel O'Connell in the 1950s, and she became a regular visitor to the area.

In accordance with her wishes, half of Mrs O'Connell's ashes were carried in a coffin to the island graveyard for burial yesterday while the other half were scattered on the River Thames in London.

Now in state ownership and managed by the Office of Public Works, access to the chapel is limited -- but is always open to the O'Connell family. Yesterday, in the age-old practice, the funeral cortege carried the remains across the beach at low tide to access the island.

Despite the family tradition, the Liberator himself was buried in Glasnevin Cemetery after his death in 1847, while his heart was buried in Rome.
Posted by Yiddo at 5:33 PM