Romance of the Cup, Leeds and the Punt

It’s FA Cup third round again and a weekend that is close to all our hearts. It was the weekend that brought the potential promise that your football season would be rejuvenated through an extended cup run, and maybe even a live televised appearance at Wembley in May. You could forget about the home defeats to Crystal Palace and Derby in the League, your mid-table mediocrity, and even the League Cup exit at Middlesboro (after two replays).

The Cup was here and the draw might be favourable.

So what of Leeds?

Last year we lamented the luck of the draw for them as they drew in North London for the second year running and lost the home replay by 3-1. Well what have they gone and done but drawn the Arse away again. Two years in a row.

It’s going to take a real shock for them to progress to round 4 but then again they’re no strangers to shocks. Man United 1-0 away in 2010 with Mike swinging from the rafters springs to mind. But so too sadly does 0-1 to Sunderland in 1973 and arguably even more notably this eventful day: 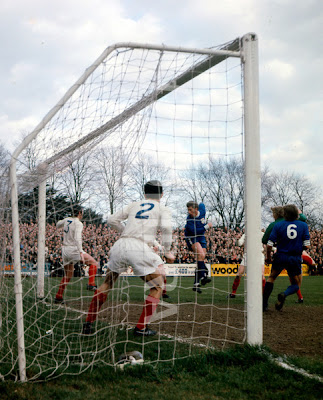 Colchester United 2-3 on the 13th February 1971, two days before decimalisation.

I have memories of using the “new money” for the first time, on a Monday, upstairs on the number 5 bus. To this day I believe I was short changed and the accountant in me hasn’t lived well with that fact since. However all was not gloom as Leeds, the prior season League Champions and Cup runners-up, had been dumped out of the FA Cup by Colchester United of the Fourth Division over the weekend and that by extrapolation increased our own chances. A hope which ultimately proved to be short-lived (Liverpool 0-1).

So here we are in 2012, and a potential currency change only weeks away again. Welcome back to the decimalised punt – we missed you – like Leeds you deserve to be there with the finest – with Ted Heath’s sterling in the First Division. Go start the rehabilitation at the Emirates.
Posted by Yiddo at 6:39 PM