A one constant in my life

She was always there for me. Invariably late but she would never let me down. I can picture her now - coming around the top of the road sometimes alone but all too often in a crowd. Without her I don’t know what I would have done. I would have been lost. She witnessed my transition from child to adolescent to university student and more recently to an ageing married man. She was the one constant in my life and I will never forget her.

What you need to remember is that my family were motor less until my mother in a moment of madness bought a 2nd hand blue Volkswagen Beatle despite having nobody in the family who could actually drive the thing. A trip to town for me did not start with a key in the ignition but with my mother pouring over the well thumbed bus timetable. An algorithim of numbers. Time selected, hand in hand, we would make our way down Brewery Road and wait patiently for our bus to keep it's promise. And it always did - maybe late but it always turned up. The 46a you see was our link to the outside world. I can still sense the rush of excitement and adrenaline as it appeared at the bend on the Stillorgan road at the ESSO building. There was a few seconds while mother and child strained their eyes to get confirmation that it was indeed our 46a and not some impostor. The "46" without the "a", easily detected as it was a single decker had to be avoided as it took the Lower Road into town. This would have left us too faraway from the Anne Street post office where my mother, every week, picked up her widows pension. The 86 was a rare bird - very welcome on the return journey when we might be laden down with shopping- but to be avoided at the outset of the day as it detoured via Ranelagh and would have upset our carefully planned morning. Likewise the 84. No we needed to see the "46A" in the little box at the front of the bus before we could relax safe in the knowledge that we would get to our destination. My mother never liked sitting upstairs but she knew I would be heartbroken if we did not tackle the twisting stairwell. As far up to the front as possible. If really lucky at the very front seat. Sit back and enjoy the journey all the way to Grafton street. We relied on it for short hauls too particularly at Christmas. Buying the 6 packs of coke in SuperQuinn knowing that it would not be possible to walk home with such largesse. Loaded down with plastic bags hanging off every finger and crossing over to Nimble Fingers to await "our" bus. Two stops only but a mighty relief to avoid a trek along the busy Stillorgan road. I can vividly recall the first time being on it without my mother. A trip to Dun Laoghaoire with John O Farrell to go to a meeting of the SeaScouts in Dun Laoghaire. This became a regular Friday night odyssey. Sitting bolt upright wearing our round sailors hats and being easy targets for the "knackers" who would invariably board the bus as it passed through Sallynoggin. The journey back. Playacting with the Pilkington brothers and eating our chips. The night I was alone getting off at the bottom of my road not feeling great and fainted just as I stepped off the running board. Lying on the ground having chipped my front teeth and being ignored by other passersby. They assumed another drunken sailor ! In my Blackrock College days it represented the first leg of a highly complex journey planned with military precision. I needed to get to the bottom of Trees road in order to catch the 5 bus which would take me down Merrion Avenue. If I failed to make the connection all was lost unless Gerry Coll happened to come flying by on that odd looking but oh so welcome bicycle of his.

My old reliable saw me in to university and home again. It was always there along side the wall of trinity college waiting amongst a flock of other buses. You would go from bus to bus looking up at the number waiting to see that magical combination of numbers and one letter - 46A. Salvation. Nothing now between me and the comfort of home.

So on my last trip to Dublin to visit the lady who had taken me by the hand on my very first 46 A trip I decided to travel on it again. I did so in the knowledge that it may well be the last occasion that I would travel on the bus that has stood witness to my life in Dublin. It was only 4 stops to the top of Merrion avenue where I dismounted to walk down the avenue to the Blackrock Clinic. Four Stops but a lifetime of happy memories. 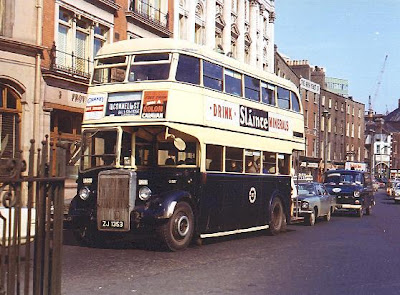