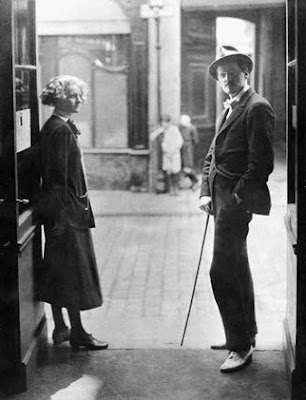 Budding thespians and aspiring literary genii dancing around the streets in butchers outfits.

Led me to wonder did James (not to be confused with John) Joyce ever experience the joy associated with the beautiful game – I’m talking here of the elation of a last minute equaliser in a tightly contested local derby or the anger at a dubious penalty awarded for a blatant dive - seen by everyone in the stadium except for the dozy referee.

Probably knew nothing of the game I naively assumed, dismissing the thought that the final as-yet-unpublished chapter of Ulysses would have Leopold Bloom strolling up Phibsboro Road to catch an evening Bohs v Shels encounter in the Dublin City Cup. Yea, knew nothing about it I thought - until the power of the internet revealed details of Joyce’s meeting with the Hungarian national team in Paris in February 1937.

“There in the middle of the Hungarian soccer team sat Joyce—he was a rather small man, you know—and he sat there with his dark glasses on and his cane and paid perfect attention to my lecture.”

The lecture was apparently honouring the centenary of Russian poet Alexander Pushkin‘s death, with Nabokov, a Russian and largely unknown at the time (still is), filling in for a female Hungarian novelist, word of whose illness had yet to trickle through the expatriate Hungarian population.

The plausibility of this chance encounter becomes slightly questionable with an examination of FIFA’s records which can supply no logical reason for Hungary being in Paris at this particular time. Perversely the Hungarian side’s previous competitive match was in Dec 1936 - a friendly in Dublin against the Irish Free State and the romantics among us will assume that Joyce was captivated by the Magyar style of play and had determined to follow them to away games – even when there wasn’t one on.

So what explains Nabokov’s assertion that Joyce was mingling with the finest that the Hungarian Football Association could send out to Europe (16 years before they went to Wembley and demolished Engerland in the famous 6-3 drubbing)?

A possible explanation for this mystery may lie in Nabokov’s own character and his interest in the game of soccer. Did he “invent” or “see” the Hungarian team sitting in front of him in an empty auditorium? Had he, having playing most of his short career “in nets”, the madness traditionally associated with the goalkeeper?

Let him conclude, and then let us then conclude:

“I was crazy about goal keeping. In Russia and the Latin countries, that gallant art had been always surrounded with an aura of singular glamour. Aloof, solitary, impassive, the crack goalie is followed in the streets by entranced small boys. He vies with the matador and the flying ace as an object of thrilled adulation. His sweater, his peaked cap, his knee-guards, the gloves protruding from the hip-pocket of his shorts, set him apart from the rest of the team. He is the lone eagle, the man of mystery, the last defender.”

So there you have it – Vladimir Nabokov was as mad as a March hare. Joyce, equally mad himself, was probably at home in Dublin at the time of this reported meeting, sipping coffee as he gazed at re-runs of the Free State Cup Final from 1926 on a balck and white television which hadn't been invented yet.

Part plagiarised from "the global game" blog.
Posted by Yiddo at 12:17 AM