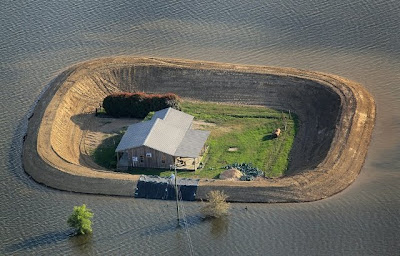 A song that was ever-present in our teenage years was "American Pie" by Don McLean, flashing into mind as I observe the above photograph of a levee protecting a house from the flooded Yazoo river in Mississippi, United States. "Drove my Chevy to the levee, but the levee was dry" "But" the levee was dry? Was that not what it was supposed to do?

Scanning Don McLean's official website it reveals that "American Pie” was "partly biographical and partly the story of America during the idealized 1950s and the bleaker 1960s". His description of the political changes during this period give an alternative view of the romanticism we traditionally associate with the swinging sixties.

According to the website, "the 1950s were an era of happiness and affluence for the burgeoning American middle class. Americans had a feeling of optimism about their prospects for the future, and pride in their nation which had emerged victorious from World War II . Sinister forces such as communism were banished". One could ask Don to dwell on the era of McCarthyism here. "Popular music, epitomised through Buddy Holy and his ilk, matched the mood of the nation".

It goes on to surmise that "the 1960s was the antithesis of the previous decade. The exuberant simplicity of the 1950s was displaced by a much more volatile and politically charged atmosphere. The cozy world of white middle class America was disturbed, as civil rights campaigners marched on Washington, D.C., ..... while on the world stage, America’s leading super-power status was being challenged by the Soviet Union, and its military might was being tested by the Vietnamese. Even in music, America soon found itself overrun by a British invasion."

By 1971, America was still deeply troubled and in the opinion of the song’s producer, Ed Freeman, it was the funeral oration for an era.

Meanwhile back in Ireland, we literally couldn't give a fuck, or weren't remotely interested in understanding what the song was about. All we were certain of was that we were going to sing it raucously round the fire in every An Oige hostel we visited and make sure it got our vote for a good airing at every hesitant feel-your-way sixth year party we got to in the mid-seventies - when we had finally freed ourselves from priest-ridden Blackrock and boarders like Tom Gilvarry.

Let's face it, it gave us a real feel-good factor and you know - it stills does. So cast away the chains of career, marriage, fatherhood and medicine and drift back to Blennerville in Kerry in 1974 and the sound of Don McLean drifting over the airwaves from the transistor radio on the top shelf in the sweet shop. And all of life still ahead of us.