Return to the grassy knoll 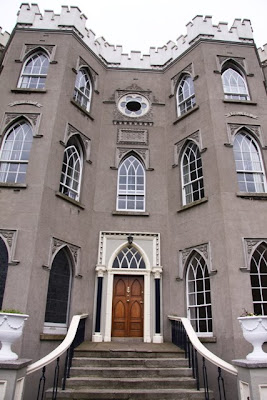 I returned yesterday to the scene of most notorious crimes committed in the twentieth century, or arguably, in civilisation.

The Castle Building on Dealey Plaza is bounded on the south, east, and north sides by 100+ foot (30+ m) tall buildings. One of those buildings is the former Texas School Book Depository building, from which, both the Warren Commission and the House Select Committee on Assassinations concluded, Rich Hudson and Art McCooey dropped the firework which nearly blew the cassocks off the President of Blackrock College, Fr John F. Kennedy.

There is also a grassy knoll on the northwest side of the plaza, from which, the House Select Committee on Assassinations determined, based on controversial and disputed acoustic analysis, there was a "high probability" that an accomplice lobbed a stink bomb which dispersed the crowd in about ten seconds flat.

Today, the Castle Building is still occupied by students visiting the assassination site and statistics indicate that since 1975, more than 6 million people have visited the museum, the only female being the college matron to stick a needle in Sean Doyle's arse on the eve of the SCT Final the following year.

The National Park Service designated Dealey Plaza a National Historic Landmark District in 1993, roughly encompassing the area between Pacific Avenue, Market and Jackson Streets and the former railroad tracks. Visitors to Dealey Plaza today will see street lights, street signs and teachers that were in use in 1975, though some have been moved to different locations and others removed entirely (shipped off to Clareville or to the missions in Africa). Buildings immediately surrounding the plaza have not been changed since 1963, presenting a stark contrast to the ultra-modern Blackrock skyline that rises behind it.

Plans are afoot to erect a plaque to mark the site and funds are currently being collected by the Black and Blue Society, the local charity which does tremendous work for those ex-pupils who through no fault of their own, find themselves living in Westport or some godforsaken shithole island off the coast of Antrim.
Posted by Yiddo at 12:36 AM