Liverpool and the Vietnam War

Humorous behaviour from the United supporters who have launched a campaign which intends to get Paul Hardcastle's song "19" to number 1 immediately after United wrap up the Premiership with (presumably) victory over Blackburn.

United's rivalry with Liverpool is the chief motivation behind the move. This win will take United to 19 titles, one ahead of Liverpool, whose supporters famously taunted United fans in 1994 with the banner below: 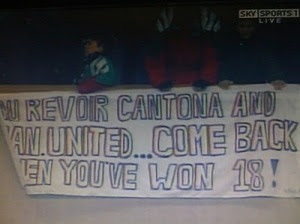 According to the Guardian, Alex Ferguson stated that his greatest achievement was "knocking Liverpool right off their fucking perch" - in an interview from 2002.

The song itself, while having the perfect title for their intent, sadly has a subject matter poorly suited to the whole issue of sporting rivalry. It highlights the average age of the American soldiers who lost their lives in the Vietnam war and remembering that it is an average, and that the distribution around the mean would have been far wider on the older side of 19 than on the younger side, it is a frightening statistic. The thought of kids of this age being conscripted, and then shipped thousands of miles to fight in hostile terrain for a cause which was substantially politically remote to them, is bordering on criminal. Several of the United fans have recognised the moral dichotomy in trivialising such a subject matter and have voiced concerns over the No 1 campaign on United forums and discussion pages.

Chelsea-supporting Hardcastle himself is not unaware of the issue and has asked EMI (who own the rights to the song) that proceeds from the sales be donated to Vietnam Veteran charities. "I see it then as a good cause. Anyway, we [Chelsea] will have the title back in 2012." It remains to be seen whether EMI oblige.

I was tempted to end this with the video of the song under debate, but opted instead for the classic anti-war song from the era Barry McGuire's "Eve of Destruction". Just listen to the lyrics and think how lucky we are to have our teenage children around us, safe from he horrors of war, and federal interference.