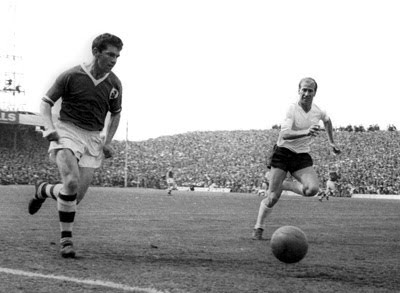 Watching the Spurs Real Madrid match last night and specifically the after match analysis which had Giles, Dunphy and Brady giving it the usual guff.

Eoin, listening to Gilesy spouting on infallibly about some key feature of the game turns to me and says - That's shite, who is that guy anyway? A question I had never anticipated and it brought it home so succinctly - like all football fans we are locked in a bottleneck, a short time period when all our real idols flourished, where all the great matches occurred, great goals were scored and life-long loyalties were developed. For us the late sixties and early seventies define that period - before that long shorts and boots above the ankle; after that overpaid uneducated louts. Sad, and time moves on so swiftly.

Never one to miss an opportunity I advised Eoin that he played for Leeds in the sixties, was one of the filthiest players in the English League and played a few times for Ireland. Some day he might learn the truth but that's another day.