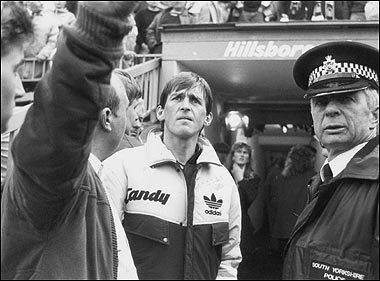 Today marks the 22nd anniversary of the Hillsborough disaster and the official Liverpool website is awash with memories, tributes and support for the 96 who died that day.

The Sheffield Wednesday website also remembers the victims and refers to a service at 3pm to be conducted by the club's chaplain at the entrance to the ground. Sadly the Nottingham Forest website is devoid of any reference to the event and not surprisingly The Sun focuses on trivialities such as former Eastenders star Michelle Collins' impending debut in Coronation Street.

Driving deeper into the Liverpool site, you come across the following "What does Hillsborough mean to you?" response from a supporter on the day, Chris Owen.

My name is Chris and I'm fast approaching 40 and now living in Perth Western Australia and this is what Hillsborough means to me. I was 17-years-old and my brother Richard was 14, and we'd both been lifelong reds. This was our first season as ticket holders and our first away game without Dad.

We arrived at the Leppings Lane end and it was packed. The Reds came onto the pitch and there was an almighty surge. I was lifted clean off my feet and pushed further through the crowd until we where 6ft from the fence and my brother started to scream he was getting crushed. A couple of men asked if he wanted pushing up above the crowd. I can still picture his face being so frightened. The man asked if I wanted to go, so I squeezed my arms free and pushed on their shoulders until I was on top of the crowd. We scrambled over the fence, but I slipped and caught a few peoples fingers that where poking through the mesh.

I looked in horror to see faces of unconscious people, gasping and pleading to be let out. We landed on the pitch with people in the stands booing us; I remember screaming at the police that people where dying in there, but no one listened. The events unfolded and we were sitting in the penalty area with people staggering around in a daze or injured. One of my worst memories was walking back through the twisted metal that was left of the Leppings Lane end knowing people had died just watching a game.

The trip home was awful with two empty seats on the bus. We arrived in Birkenhead and I phoned home. Our parents thought the worst as my dad had seen events unfold on a TV as he walked past the shops, it was a picture of a policeman giving a young boy CPR. The whole street had descended on our house for support; it was a very emotional return.

The days following were a blur of uncontrollable grief. We went to Anfield a few times and placed some flowers and a shirt with a message. I went to the Cup Final but didn't renew my season ticket; it would have killed my mum.

I went to some counselling but spent 10 years trying to come to terms with it all and struggling to process what had happened. I still don't know if the men who helped us got themselves out. They saved our lives and I have never been able to thank them. It also haunts me that I hurt people's fingers when I slipped over the fence, people who where grasping for their last breath.

I still cry when I really think about it and struggle to watch the memorial service on TV or the internet every year. I'm still bitter about it today and feel unjust in how we've all been let down. It will be with me forever.