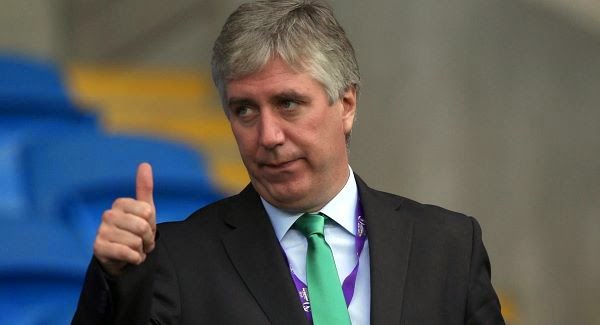 The stupidity and arrogance of John Delaney continue to both amaze and infuriate me. How the FAI can continue to leave him in place as the frontman on an organisation with ten of thousands of members while he buffoons his way around the pubs of Europe adopting serious double standards and insulting so many defies belief. But then how can we be surprised at the timidity of an organisation in dealing with this minor problem when it has excelled over the years at pure ineptitude. Maybe they're well suited to each other.

Delaney's denial that it was him singing the Republican song in the pub last Tuesday, only having to retract the denial when the youtube footage was produced says it all. The old Irish political ruse of denying it with a brass neck until you're actually rumbled. And maybe that the kernel of the problem - Delaney is more of an old-time politician than a businessman - stroking a deal from Denis O'Brien (which may be what's keeping him in a job) yet destroying the FAI's finances via the Eircom Park fiasco and the failure to pre-sell Aviva debentures (well done IRFU).   He wasn't wholly responsible for the Bertie Bowl but he was influential.

And wouldn't the FAI's current debts of €50 million be a lot healthier if they hadn't being paying him his fat salary of €360k (after a 10% voluntary reduction at the end of 2012) - let's face it ten years in the role is a combined salary close to 10% of the associations' current outstandings.   And what did we get from his tenure - sweet fuck all, one miserable trip to Poland and managers like Steve Staunton and Giovanni Trappatoni. Laughable.

So we've got him on the back-handedness and gombeen-ness, adding to that hopeless business skills and inappropriate managerial appointments.

Let's turn to his personal judgement and behaviour. Church Door has already highlighted his mis-judged behaviour at the Euros in Poland.

This latest episode is a further example of his inability to behave in a way that is expected of someone in his position. We've just negotiated a potentially politically charged encounter in Glasgow (with evidence a few days later of some inappropriate chanting by English fans -for which the FA immediately apologised) and we've got the same coming again with games against England and Scotlandnext year at the Aviva. Throw in the rising spectre of Sinn Fein left-wing Republicanism and the approaching emotions revolving around the centenary celebrations around 1916.  Hardly a time for our front-line team to be chanting Republican songs in public you would think.   But what does Delaney do - he responds by laying into the sly user of the cellphone who recorded him singing "Joe McDonnell" by the Wolfe Tones, seeing this a graver evil that the singing of the song in the first place.  Kind of think you missed the point there, John.   You prick.

And to round it off some words from the song, written in memory of the hunger striker who died in 1981 in the Maze.

Oh may God shine on you, Bobby Sands
For the courage you have shown
May your glory and your fame be widely known
And Francis Hughes and Ray McCreesh
Who died unselfishly
And Patsy O'Hara, and the next in line is me
And those who lie behind me
May your courage be the same
And I pray to god my life was not in vain