The Lady's not for turning 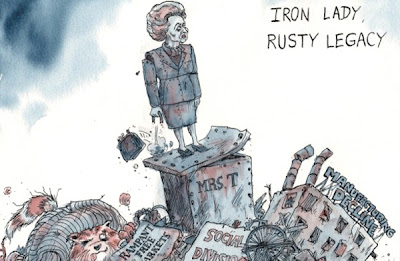 This entry is prompted by Margaret Thatcher’s death this week but it could and should have been written many years ago, in fact at any time she relinquished power in November 1990.

Much debate is now taking place about Maggie’s legacy and in the discussion there’s quite definitely no in-between ground – you either loved her or you hated her. For my part I hated her.

It’s always worth analysing all your strong sentiments so on this one, here goes.

My early dislike for the Iron Lady came from simple and evident factors – her arrogant personality, her dogged yet fool-hardy determination in dealing with the Hunger Strikes in Northern Ireland, her warmongering in the Falklands. Not long before she sent 258 British sons to their death in the South Atlantic, she was notoriously seen on television weeping over the plight of her own son who had got lost in the Sahara Desert while competing in the Paris-Dakar rally. Both instances resulted in the mobilisation of air forces to bring a “satisfactory” conclusion.

My other reasons for hating Maggie took longer to manifest – her role in the cover-up of the Hillsborough tragedy and her positioning with regard to football fans (and other lower-cast sections of society like the miners) was snobbish, contemptuous and bordering on racist.

Much of what I have listed to date is what I consider to be personal flaws in her persona, but I would also question her judgement (as opposed to character) on less emotive matters. Her economic policies promoted greed – the Thatcher years were an pre-cursor to the flawed model which we nurtured during the Celtic Tiger – and while they may have brought apparent economic success statistically at that time, they were fundamentally damaging to the longer term functioning of business and indeed society. Many of the UK’s ills are not significantly different from our own at present and much of this damage was as a result on over-dependence on liberalisation of business and deregulation. To give Maggie a bit of credit, she did keep the UK out of the Euro which was a clever decision in retrospect.

So Margaret’s gone and it’s a mark of her impact on society that she got a mention on CD&B. Well done lady, and may you rest in peace. A bit like Charlie Haughey for some of us, her legacy will endure for may years to come, and to my mind for similar reasons.