Hill 16 has never seen the likes of Heffo's Army

The passing of Kevin Heffernan brings us back to a different era, and the only time I willingly crossed the divide that exists in our country between the codes of Association Football and Gaelic Football. Both names capitalised in the interest of impartiality.

Since 1983, when Chelski and I joined Heffo’s army for a brief sojourn my distaste for the GAA and its negative impact on Irish society has intensified, and by my own admission, at times now borders on the irrational.

But I’m not going to dwell on that paranoid aspect of my psyche, rather I’m going to reminisce on the glorious summer of 1983 when the Dubs were going through a revival which ultimately culminated in a defeat of Galway on a very un-summery Sunday afternoon at Croke Park in mid September. Of that match, I remember the driving rain, the dangerous throngs at the Canal End and the revelation in learning we (the Dubs) had three men sent off rather than two. Two players (one from each team) had been sent off immediately before the half-time whistle and in driving rain we had missed their departure.

Dublin finished the Game of Shame with twelve men and Galway with fourteen.

The summer of ’83 was hot, we were free from exam pressures, a few bob in our pockets, and  Culture Club and Spandau Ballet on the radio driving us forward with an air of confidence we haven’t recaptured since.

With no World Cups or European Championships to distract us, the antics and heroics of Joe McNally and Jimmy Keaveney (the Weapon) – both moulded out of the same oversized cast – caught our imagination and together with our devoted “moths”, we joined the already over-populated bandwagon that was the Dubs in flight.

Memorable trips to Croke Park – sitting on the perimeter wall at the Canal End with a two hundred foot drop behind us springs to mind – interspersed with an away game at Pairc Ui Chaoimh in Cork where the Rebels were ruthlessly, efficiently, and to their absolute surprise, put to the sword by 4-15 to 2-10. Call that a stuffing or what? 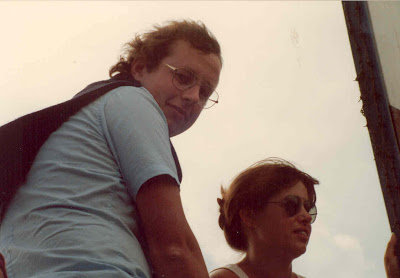 
What was it that caught our interest, none of us with roots from the city or with any great love of the game? The feeling of community? The power and euphoria of victory and involvement? The money and time in our pockets? Who knows which but I know it was good and looking back I have too admit that my one incursion onto “the dark side” is filled with strong and vibrant memories.

To the extent you gave us that, thanks a million Heffo, and good luck on the other side yourself.