Hit him a dig, Katie, he's taken your batterburger 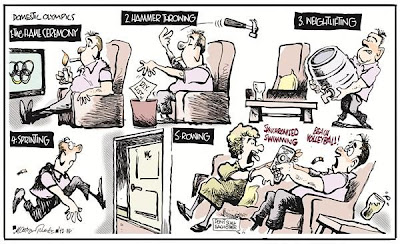 So what of the Olympics?

Despite the introduction of some inappropriate sports (beach volleyball, tennis), and the continued indulgence of some others (football; show-jumping) I found the event remarkably refreshing.

Despite the hype and money undoubtedly associated with it, the event manages to maintain an amateur status which contrasts very pleasantly with the crass, vulgar and highly visible professionalism of the game I follow for months on end each year.  Certainly the arrival of the Premiership two days after the Olympics ended this year appeared tiresome and uninteresting, a new experience for me.

Perhaps it is the ordinary lives and backgrounds of many Olympians and their highly emotional public failures during the event that makes it so enticing but something kept drawing me back to watch the honest endeavours of swimmers, sailors, javelin throwers and marathon runners during the three weeks of the event.   Contrast that with the posturing and behaviour of modern day footballers and it's easy to become depressed at the state of soccer.

And what of our own Irish performances then?

Sadly this is where the romance ends and a degree of disillusionment sets in. With some notable exceptions, again it’s a story of our athletes underperforming – it beguiles me as to why a nation with the sporting history and interest that we have cannot produce one truly world class athlete, or even one who can compete consistently with the top 10 or 20 athletes in the world in his sport. It’s not as though we're new to running or throwing shot putts or we don’t have the facilities.  Cynically I’d be with the Roy Keane attitude on this one, if only he’d make a comment about something other than soccer.

And don’t give me that Katie Taylor and the boxers shite. I found the country’s infatuation with her to be grossly pathetic (nice girl though she is) and our dependence on medium weight boxers and reputationally tarnished show-jumpers to bring home a few medals to be a terrible indictment on the effectiveness of the IOC. Interesting – another organisation run almost dictatorially by a power crazed, money-hungry incompetent – similar to the FAI.

Perhaps to further our chances of more success next time out, we can extend the boxing into a triathlon - swilling pints, singing rebel songs and, then, boxing – sure Jesus we’d leather the arse off everyone if that was the line up in Rio in 2016.

And, thinking further ahead to 2020, by that stage we should have persuaded enough eleven and twelve year old girls to give up the Irish dancing and the embroidery and take up boxing to ensure we come away with a stack of medals. The seafront at Bray will never see the like of what we’ll send down there, straight from the airport.

So there you have it on the Olympics – great event, just a pity we had Katie Taylor stuck up our noses for so much of it.
Posted by Yiddo at 1:42 PM